This is the second part of my initial look at the Formula One grid after the first test of the 2017 season. As I mentioned yesterday this year has seen a seismic change with the rules as the cars have been given bigger tyres and more aggressive aero, with the intention of increasing lap times significantly.

It appears the 2017 spec machines will be roughly four-five seconds a lap faster than last year, a huge leap which should see many existing lap records fall by the wayside this season. This second part of my round up looks at the final five teams and their form after the first test. Of course the test is still taking place today, however with it being designated as a wet day the amount of useful running is severely limited today.

McLaren: The British team suffered during the most recent hybrid era. The team that has been one of the dominant forces of the sport over the past 30 years, however have not won a race since the 2012 Brazilian Grand Prix, just over four years ago. The team therefore have been under a lot of pressure since they joined forces with Honda in 2015, as the expected improvement in results have not materialized so far.

This year has seen some new faces within the team with sponsorship guru Zak Brown was named executive director of the McLaren Technology Group, effectively replacing the ousted CEO Ron Dennis. The team have also replaced their standard silver paint work with a ode back to the original papaya orange colours of company founder Bruce McLaren. In a final move the team have split with the past again by replacing the previous Ron Dennis MP4 designation on the cars, switching to the MCL32 for this years chassis.

The McLaren MCL32, complete with aero sensors, in what has been a very difficult first test. Photo: Motorsport.com

On track it has been a disappointing opening test for this once successful team. The team have battled with engine issues for the majority of the test, with the team fighting a fundamental oil tank issue which necessitated two engine changes on the opening two days. With this in mind the team have so far been severely limited in their running, their best day being the third with Fernando Alonso behind the wheel. They completed 72 laps, raising hopes for their reliability.

Reliability concerns are joined by pace concerns for this team. The fastest lap Alonso has set on day three was a 1m22.598 on the ultra soft tyres, 2.893 seconds off the fastest time set by Valtteri Bottas on the same tyres. This will be very concerning for the team as coupled with their reliability issues, it could end up being a long season for everyone involved with the team.

Track side observers have also repeatedly mentioned how the car seems unstable and drivers are often having to lose speed in the corners by having to lift off the power to get the car to turn. Whilst have received a lot of criticism for the serious woes with their power unit, it appears the MCL32 should take some of the responsibility for the lack of pace from their package. The best thing for this team is that the first test is over and they have time to rectify their issues before the next test.

Renault: The French manufacture returned as a works entry last season, however it proved a difficult one for the team. They only scored eight points all season and ended the year ninth in the Constructors standings.

This year with a full year of the larger factory Renault budget the team are hoping for an upturn in results, however McLaren have recently shown how difficult that can be. Signing the underrated Nico Hulkenberg is a good first step for this team, and so far they have had a solid opening test.

Renault have built a solid foundation with their R.S.17, but how far up the grid can they go? Photo: Motorsport.com

The R.S.17 has proved a reliable car, with their only small drama was on Tuesday morning when Jolyon Palmer was only able to complete one installation lap.  Aside from that the team have run over 50 laps on each day of the test.

Both drivers have performed at a similar level in this test, with their best placing being on the third day when both drivers ended the day in the top five, separated by only 0.5 of a second. The team look to have a solid midfield car based on this test, although some have noted the Renault engine running significantly quieter than the rest in this test. Could this be a sign the team is running at reduced power? So far the team have a very solid foundation with this car to build on for the rest of pre-season.

Scuderia Toro Rosso: The Red Bull junior team have finally stepped out of the shadow of their bigger brother in recent seasons. The team have proved themselves a key developer of young talent, and with Carlos Sainz Jr and Daniil Kvyat they have two very talented young drivers this year.

The new STR12 stole a lot of headlines when it was launched thanks to it’s bold new livery, in reference to the Red Bull cola brand. The team initially felt that AMG Mercedes  had taken some of the teams styling cues, however on track the team have performed well with some good consistent running.

Aside from the third day when the team sat out the afternoon running for an unspeicified reason, the team have produced some good lap counts to gain valuable knowledge of their new STR12. Both Sainz Jr and Kvyat have had some good running to get used to the new spec cars.

In terms of pace they look to have slotted in right where they were last season, with good midfield pace that should have them on the outskirts of the top ten. For a team that will likely never be able to match it’s Red Bull racing team mates, they have once again produced a very good car which can see them possibly progress up the grid this year.

Haas F1: The American team face the difficult task of repeating their 2016 success. Despite a deep link with Ferrari many didn’t expect the team to produce much during their debut F1 season. The team shocked the paddock last year by taking a fifth place in their debut race, and scored points on a number of occasions during the opening races.

As the season wore on predictably the team slide further back on the grid, however it was a very impressive debut season for the team. Now they face the difficult task of repeating their efforts from last season, as they look to avoid the dreaded second season syndrome. The team have built a good foundation in the opening year and with Kevin Magnussen replacing Esteban Gutierrez the team have a very good driver line-up with Magnussen and Romain Grosjean. 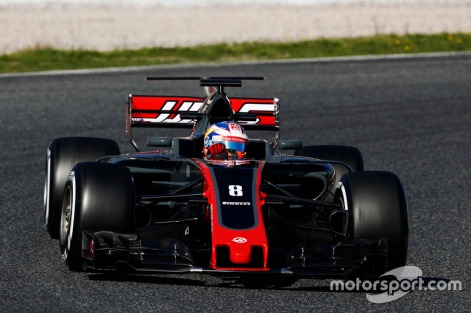 Romain Grosjean with the Haas, can they avoid second season syndrome? Photo: Motorsport.com

The VF.17 started the test well with Magnussen at the wheel. The team were consistently in the top five with 1m22 lap times and ran reliably with no major dramas to report. The Dane even managed to record 118 laps on Tuesday, a phenomenal amount of laps on the second day of the first test.

The team slipped back in the times once Grosjean was aboard for the third day, as a lot more teams started going for fast lap times over general reliability. The Frenchman still managed over 50 laps and their performance has put them in a good position. The team are several seconds off the ultimate pace so far and appear to have maintained their position in the lower midfield order, something that is impressive for this team that is still growing.

Sauber: The Swiss team are every bodies favorite underdog within F1, a role they have mastered since entering F1 in 1993. The team have struggled mightily in recent seasons with financial issues, however it appears these are hopefully less precarious this season after a recent take over.

The team have signed promising Mercedes junior driver Pascal Wehrlein, although he is not driving this week on doctors orders after suffering a back injury during the end of year Race of Champions late last year. Marcus Ericsson is a solid grand prix driver and his familarity with the team will stand him in good stead as he looks to carry on his F1 career progression.

Sauber are everyone’s favorite underdog, let’s see if they can return to former glories this season. Photo: Motorsport.com

The C36 once again appears a reliable if not ultimately pace setting car. The team have produced some good runs in this test, with their only issue being a power unit problem that robbed them off meaningful running on the second morning of the test. The team have steadily improved their pace over each of the days, culminating in Ericsson setting a quick 1m21.824 on the super soft tyres. It’s unclear if this was a low fuel run to generate headlines but the fact Ericsson also did 126 laps that day is a huge positive for the team.

Based on the first test Sauber look to have produced a reliable car which gives them a good foundation going forwards. In terms of ultimate pace they may struggle initially, but it’s possible the team could find themselves embroiled in the midfield scrap during the year. A lot of people involved with the sport would be rooting for them if they did.

Thank you for reading and I hope you enjoyed this round-up. Find me on Twitter @brfcjordan95 and any comments at all would be greatly appreciated!