This week Formula One 2017 fired into life with the first pre-season test at the Barcelona circuit, the venue for the Spanish Grand Prix in May. After the initial launches of the new 2017 spec cars last week, many questioned whether the established order from years previous would be shaken by the new 2017 regulations?

For this year the cars have bigger tyres and  increased aerodynamics have all been done with the intention of making the cars significantly faster than in previous years. The further aim of this was to make the cars more physical and harder to drive, with many fans previously bemoaning the fact the previous cars seemed too easy for the drivers.

With such a large jump in predicted performance many involved within the sport and fans were eagerly anticipation the start of testing, to see if the regulations had indeed significantly changed the order and more importantly ended the AMG Mercedes dominance of the sport.

Of course, as I write this we are only on the third day of the first pre-season test, therefore some predictions for the season are far too premature. These are simply my first impressions team by team  from the opening days, after keeping track of the running in Spain.

Petronas AMG Mercedes: The dominant team since the new hybrid regulations came into place for the 2014, it was a vague hope from fans and experts that with the biggest regulations change arguably since 2009 that they would have to fight for their race wins instead of the dominance they have enjoyed for three years.

Based on the first test they are once again looking the team to beat this season, with their W08 car proving comfortably the fastest and the most reliable so far. This car been in the top two of the times on both days and on the morning of the third day new recruit Valtteri Bottas set the fastest time of the test so far on the ultra soft tyres, a 1m19.705. 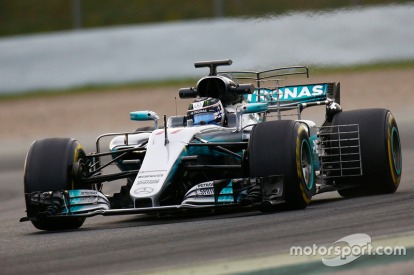 Valtteri Bottas in action. Note the ubiquitous aero sensors and the T wing just above the rear wing, it has been causing a stir in the paddock. Photo: Motorsport

To put this into perspective, this time is 0.2 of a second faster than the unofficial fastest ever lap around the circuit, previously a 1m19.954  set by Rubens Barrichello in qualifying for the 2009 Spanish Grand Prix. The fact the drivers are already bettering unofficial lap records surely means the old lap records will tumble once the 2017 season gets underway.

The car has also proved extremely reliable, with the team showing their muscle by doing race simulations on the second day of testing! It’s fair to say this is an ominous sign for the rest of the paddock. With the team showing so well on both the overall pace and reliability front, it appears AMG Mercedes are looking to be the dominant team they have been since 2014.

Ferrari: The most famous name in Formula One suffered from a below par season. After an impressive upturn in 2015, the prancing horse whimpered in 2016. With the pressure mounting on the team and especially team principal Maurizio Arrivabene this off-season the team have kept quiet on their expectations for 2017, no doubt thinking back to how doing this last off-season ultimately hindered them during the year.

The teams new SF70H has so far shown well in testing, clearly cementing itself so far as the best car behind the AMG Mercedes on both pace and reliability. The car had looked a step off the ultimate pace of the Mercedes on the opening two days, however on the third day Sebastian Vettel has shown some strong pace in the car. On the soft tyres in the early afternoon of day three, Vettel set a 1m19.952 lap time. 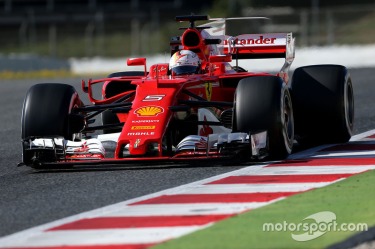 This is a hugely impressive time from Vettel as the expected improvements from having the ultra soft tyres on would have likely turned this into a 1m19.3 lap time, easily the fastest of the test so far. Seasoned observers watching from track side have also noted that the Ferrari is by far the most stable car on circuit, suggesting this car has the best front end of any on the grid.

This will likely prove important during the season as on new tyres having a good front end will prove hugely beneficial.This will likely mean the Ferrari is able to get up to speed on new tyres quicker than the rest, and a planted stable car will also help reduce the workload on the tyres during a stint, which will keep them fresher and therefore likely produce faster lap times well into a long stint.

Red Bull: Red Bull have been known in the paddock for the majority of this decade as having the most aerodynamically efficient and one of the overall best cars on the grid. In recent seasons the only thing hampering the team has been a lack of engine horsepower from their Renault power plant.

The team made strides last year and has the best young driver line up on the grid in Daniel Ricciardo and Max Verstappen, both potential future world champions. Their RB13 has run consistently well so far in testing, aside from a sensor issue on the opening morning that limited Daniel Ricciardo to just four laps. 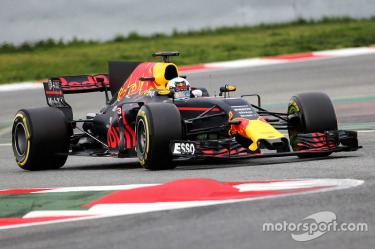 The Red Bull appears a conservative design, but could this be the way to go? Photo: Motorsport.com

Since then the car has run consistently as the team have racked up the laps, with both Ricciardo and Verstappen routinely placing themselves third fastest on the times. From this first test it appears a very early pecking order is being established at the top with AMG Mercedes leading Ferrari and then Red Bull.

Some observers have noted the Renault engine cars are running quieter than the others, a possible indication they are not running to their full engine potential. This could mean we see a much more competitive Red Bull once we reach Australia and the opening round of the 2017 season.

Martini Williams: The British team have been through some drama in the off-season, with the ongoing sage of Valtteri Bottas move from Williams to AMG Mercedes to replace recently retired world champion Nico Rosberg.

The team have produced the new FW40 which looks stunning in the evocative Martini livery they have. With the experienced Felipe Massa delaying his retirement for one more year and the young Canadian Lance Stroll on the driving front, the team have a mixed line up of youth and experience going into the season.

The test so far has been mixed for the highly successful privateer team. The opening day started well with Massa completing 103 laps and setting the third fastest time. Rookie Stroll took over on the second day and got some initial running in before prematurely ending his and the teams day with a spin into the gravel at turn nine. It was an innocuous looking spin but ended up doing damage to the front wing, which was the only one the team had. 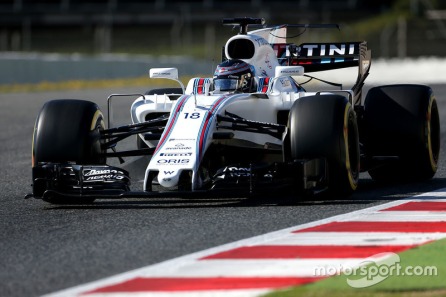 Stroll has had three off’s in two days. For an F1 rookie, what damage does this do to confidence? Photo: Motorsport.com

This will likely mean the Ferrari is able to get up to speed on new tyres quicker than the rest, and a planted stable car will also help reduce the workload on the tyres during a stint, which will keep them fresher and therefore likely produce faster lap times well into a long stint.

It is a big step up from F3 to especially the new spec F1 cars therefore its understandable if he is struggling. The frustrating thing for the team is that with every off from him it’s costing the team valuable track time in learning about the car. With testing increasingly limited in F1 every moment of available track time is becoming increasingly pivotal. It also prevents him from gaining even more experience going into his debut F1 season.

Sahara Force India: This team was the best pound for pound team on the grid last year, using a modest budget to secure a very credible fourth in the Constructors championship. With a new set of regulations its always the teams with smaller budgets that struggle the most, however with a great infrastructure and stability surrounding the team there is no reason for them not to repeat last years heroics.

The team have so far had an up and down first test, with some mechanical issues along with some long runs. On the opening day Sergio Perez was stopped for the majority of the afternoon with a broken exhaust, limiting the team to only 39 laps and the seventh fastest time. 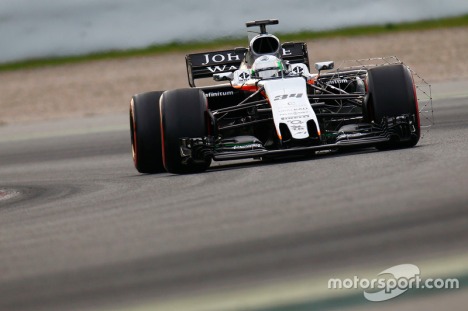 Celis Jr earning a chance in testing. With limited testing time it’s brave to keep their race drivers out the car for a day. Photo: Motorsport.com

The second day went much better for the team with new signing Esteban Ocon setting a competitive 1m22.509 lap time that proved the fifth fastest of the day. He also managed to get an impressive 86 laps in, showing the reliability of the teams new VJM10.

The third day has proved a bit of an anomaly for the team, as they have promoted development driver Alfonso Celis Jr into the car for the day. The Mexican took part in free practice one for the Bahrain GP last year for the team, and he acquitted himself well considering his lack of experience at this level. He completed over 50 laps and produced a best time of 1m23.619.

It’s unclear where the team currently are with their VJM10, they will be a team to watch in the later tests as it’s unclear after the running so far where they sit within the hugely competitive midfield order.

Thank you for reading this and I hope you liked it. For anyone wanting to comment on this article, by all means feel free to give your opinion! Find me on Twitter @brfcjordan95.