Week 13 was another scintillating affair in the college football world, with some contenders being tested and some falling short. With only a week of the regular season left, some have already booked their conference championship berths. There is still plenty for everyone to play for, so let’s review the ten talking points from this past weekend.

The game of the weekend was this Big Ten matchup, one that Ohio State convincingly won 28-17. The scoreline doesn’t suggest a dominant win, but were it not for Penn State scoring 14 points in 25 seconds, this game would have ended 28-3 Ohio State.

The second ranked Buckeyes passed this test with flying colours, and look destined for the play-off. Justin Fields was solid against a top 30 defense, going 16-22 for 188 yards and two touchdowns. The Buckeyes are the top ranked defense in the nation, limiting Penn State to under 230 total offensive yards. This win secured them the Big Ten East title, and a conference championship berth.

Against a good Penn State team, it was running back J.K Dobbins and defensive end Chase Young that stole the show for Ohio State. Dobbins rushed for 157 yards and two touchdowns and was key to the Buckeyes win. Dobbins has stepped up this year, and is a vital cog for an offense that is a top six unit, averaging over 530 yards a game.

The top ranked defense saw it’s star man Chase Young return from suspension, and he didn’t miss a beat. Three sacks on his return game solidifies him as the star of this defense. He leads college football with 16.5 sacks this season, and is head and shoulders the best defensive player in college football.

The leading SEC game of the week saw Georgia creep past a tricky Texas A&M team 19-13. This wasn’t a pretty game for both offense’s, as defense was the key in this matchup. Georgia did enough to win this one, but they don’t look convincing when it comes to scoring points.

Kicker Rodrigo Blankenship scored 12 of Georgia’s 19 points, with one touchdown from receiver George Pickens. Quarterback Jake Fromm was once again solid, going 11-23 for 163 yards and a touchdown. It was defense that won this game for Georgia, as they stymied a good Texas A&M offense.

The Bulldogs are holding teams to under 270 yards a game, good for fifth in the country. Georgia have already booked themselves into the SEC Championship game, and if they can make the play-off it will be because of their defense. This unit is good enough to rival almost anyone in the country.

Baylor rolled past Texas 24-10 in a game where they overpowered the Longhorns. Baylor recovered well from a devastating loss to Oklahoma last weekend and secured their place in the Big 12 Championship game with this victory. Baylor’s defense played it’s best game yet to hold the Longhorns to ten points, allowing their offense to take over this game.

Quarterback Charlie Brewer was impressive, going off for 296 total yards and two touchdowns against a bad Texas defense. Baylor have been one of the surprise packages this season, and now should get a chance to avenge their loss to Oklahoma. 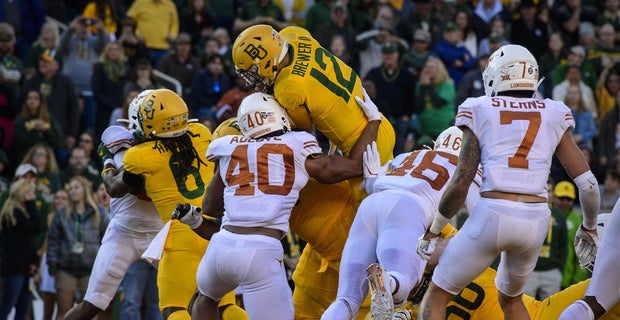 Baylor’s win against Texas secured them a place in the Big 12 Championship game. This is a massive achievement for a program that was mired in scandal only three years ago. The resurgence under head coach Matt Rhule has been remarkable, and they now find themselves back in the big time.

Their defense is underrated and they run a high-powered offense. Many questioned them going for the strength of schedule they face, but they’ve answered this in the past three weeks. Wins against TCU and Texas along with a narrow loss to Oklahoma shows this team is legit.

Michigan have improved massively during the season, coming through this tough road test with a convincing 39-14 win over Indiana. The Wolverines offense is showing signs of life, with quarterback Shea Patterson going 20-32 for 366 yards and five touchdowns.

Michigan suffered on offense earlier this season, but the unit has improved massively down the stretch. The defense has been a top tier unit all season, and they are coming good at the perfect time with their rivalry game with Ohio State this weekend.

The biggest shock of the week was sixth ranked Oregon falling 31-28 to Arizona State. The loss has ruined any chances they had of a national championship, and is tough to recover from so late in the season. Ninth ranked Oklahoma almost received a scare, overcoming TCU 28-24.

The final weekend of the regular season has plenty of massive matchup’s to end the year with. Ohio State travels to Michigan, with both teams ranked in the top 15. Michigan would love to spoil Ohio State’s path to a national championship and end the year on a high.

Alabama travels to Auburn for the Iron Bowl. Alabama are without quarterback Tua Tagovailoa and Auburn will sense the chance to ruin their rivals play-off hopes. LSU also faces a tricky matchup with Texas A&M to end their season.

The week 14 AP Top 25 poll has been released, with once again no movements in the play-off places. LSU, Ohio State,Clemson and Georgia remain the top four. Alabama remains fifth, with Utah replacing Oregon in sixth. Oklahoma, Florida, Minnesota and Michigan round out the top ten.

Baylor’s impressive win jumps them to eleventh, with Penn State and Oregon’s losses dropping them to 12th and 14th. Navy and USC return to the top 25, replacing SMU and Texas A&M.

That wraps up my review of week 13, thank you for reading and if you have any comments find me on Twitter @JWjournalism.