The final week of the regular season saw plenty of action, as the rivalry weekend usually does. The conference championship games are not set, and for those who missed out the firings have already begun. Let’s review the main talking points from another massive weekend of college football action.

Auburn ended arch rivals Alabama’s national title hopes with this 48-45 win in the Iron Bowl. The Tigers utilized their defense, scoring two touchdowns as they shredded the Alabama defense.

Bo Nix was solid going 15-30 for 173 yards and a touchdown, along with 44 rushing yards and another touchdown. Auburn’s win has vaulted them into contention for a top ten placing, whilst Alabama finds itself outside the play-off for the first time.

2) Alabama on Outside Looking In

The loss of quarterback Tua Tagovailoa ended up costing Alabama big. With one loss to LSU and a top five ranking, Alabama still had a chance to make the play-off for a sixth consecutive year. His loss was keenly felt in this Iron Bowl game, and with two losses they have no chance of a national championship.

Replacement Mac Jones played well in this game, going 26-39 for 335 yards and four touchdowns and two interceptions. Many will question however if Bama would have won with Tua. For next season it looks like it will be either Mac Jones or Tua’s younger brother Tualia who will take over as the starter for the Crimson Tide. 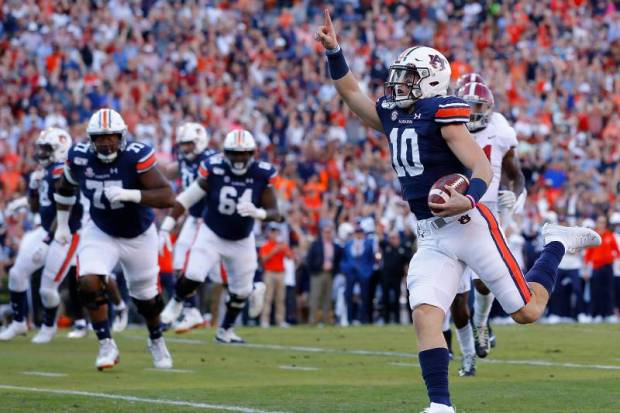 Quarterback Bo Nix runs in a touchdown in a massive 48-45 win over Alabama in the Iron Bowl. Photo: Kevin Cox/Getty Images.

Ohio State set a record with their eighth successive win over Michigan, as they routed their biggest rivals 56-27. Quarterback Justin Fields threw four touchdown passes, with running back J.K Dobbins scoring another four touchdowns in a convincing win for the Buckeyes.

With their current trajectories it’s clear Ohio State is the dominant team in this rivalry, and that doesn’t look to be changing. Michigan shows signs of improvement, but some will question whether Jim Harbaugh is the man to lead Michigan back to the top of college football.

4) Ohio State Are A Complete Team

With the regular season now wrapped up, the talk begins on the national championship game. Ohio State and LSU have been the most convincing teams this season, and both will be favourites heading into the play-off.

Ohio State first have to overcome Wisconsin in the Big Ten championship game, something they will be favoured for. The offense has improved under Justin Fields, with Chase Young leading a top ranked defense. LSU are the form team, however Ohio State have a great chance of winning a ninth national championship.

Rivalry weekend always brings massive matchup’s, with many of the favourites surviving the weekend. Sixth ranked Utah secured themselves a chance of a Pac-12 championship with a convincing 45-15 beat down of Colorado. Top ranked LSU blew apart the Texas A&M defense with a 50-7 rout. 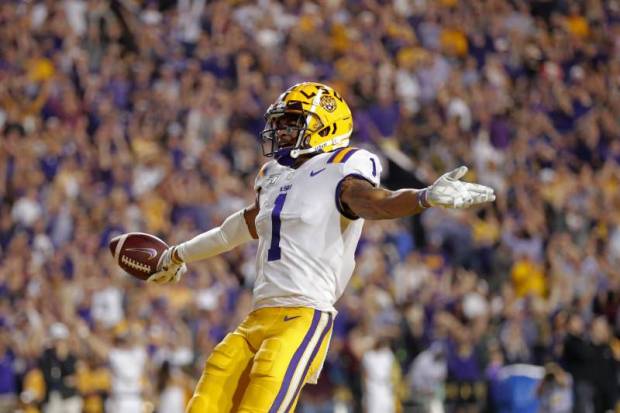 With the regular season over, attention turns to the slate of conference championship games. The biggest game undoubtedly will be the SEC Championship game in Atlanta, Georgia. The Georgia Bulldogs will have plenty of support, but will struggle to overcome a seemingly dominant top ranked LSU team.

The Clemson Tigers face 22nd ranked Virginia in the ACC Championship game, and should comfortably book their place in the play-off. The third ranked Tigers are head and shoulders the best team in the ACC,and will be heavy favourites.

The Big 12 championship game will be interesting this year, with Oklahoma facing Baylor. Both are ranked in the top ten, and both teams have showed tremendous form this year. Oklahoma will be favoured beforehand, but Baylor are a good team and shouldn’t be written off.

Ohio State against Wisconsin is another interesting game, however the Buckeyes should be too strong for a good Wisconsin team. It looks unlikely that the Pac-12 champion will make the play-off, but there is still plenty for Oregon and Utah to play for. This is a closely matched affair that could be the most entertaining of the five major conference championship games.

The college football world was shook this week with the news Washington head coach Chris Petersen is leaving. Petersen has pushed Washington into national prominence during his six years, including two Pac-12 titles.

Petersen and Washington struggled slightly with a 7-5 record this year, however he wasn’t on the hot seat. He says he wants to re-charge his batteries, with defensive coordinator Jimmy Lake taking over as head coach. Petersen has produced a lot of NFL talent and he will be sorely missed in Washington. 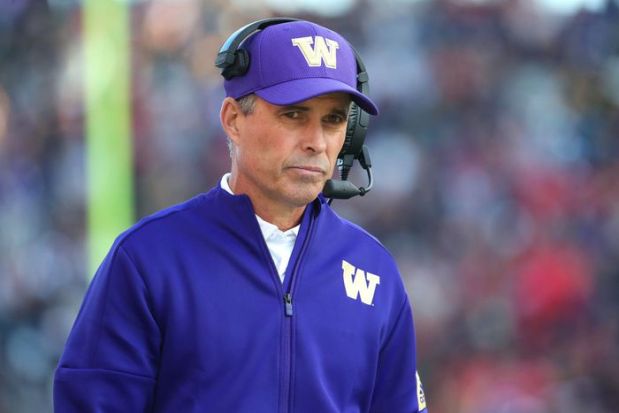 Now the season is done, the rush to fire head coaches has begun. It’s been reported that Clay Helton will soon be fired from USC, after four years in charge. This has long been rumoured, and will be a attractive job opening for coaches.

Ole Miss announced Sunday that head coach Matt Luke had been fired, after three seasons and a 15-21 record. The program is still recovering from NCAA scandal, but with a rich history will be another attractive opening. USF fired Charlie Strong, Boston College fired Steve Addazio and Missouri fired Barry Odom.

Rutgers have finally found their head coach, with Greg Schiano set to return for a second stint. The two sides have “agreed in principle” on an eight-year $32 million deal. Rutgers finished the year with a woeful 2-10 record, firing Chris Ash after a 1-3 start.

Schiano led them to a 68-67 record as head coach between 2001-2011. He massively improved the team in his first stint, and will have a tough job on his hands to improve this team from such a lowly standing.

That wraps up my final college football weekend recap, although I will post more college football content leading right up to the NFL Draft. Thank you to everyone for reading, if you have any thoughts at all either comment below or find me on Twitter @JWjournalism.