The college football regular season is drawing to a close, but there is plenty still to sort out at the top. This week has yet another good batch of games, highlighted by a massive Big Ten matchup. Almost every major conference has a matchup worth watching this week. Let’s look at the main talking points heading into week 13.

This is undoubtedly the game of the weekend, with two top eight ranked teams facing off in the Big Ten. Eighth ranked Penn State travel into Ohio State, with the winner almost certain to win the Big Ten East. Ohio State will be the favourite, but anything can happen with two good teams.

Ohio State has been playing very well on both sides of the ball this year. Transfer quarterback Justin Fields is a dark horse Heisman Trophy contender, and stud defensive end Chase Young returns from suspension for this game.

Defensive end Chase Young returns for Ohio State, after serving a two-game suspension for a violation of NCAA rules. His discretion was borrowing money from a family friend to buy a plane ticket for his girlfriend.

His suspension didn’t affect Ohio State, and now can return as they push for the national championship. He is a difference maker for this team, and is likely going to lead the nation in sacks come the end of the season. His return is another boost for this Buckeyes team. 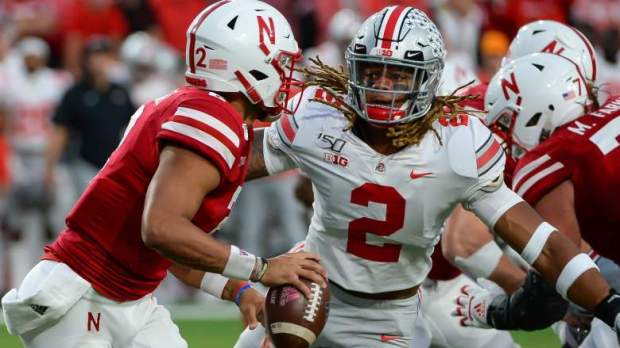 Chase Young is a difference maker at Ohio State, and his return is massive for the team. Photo: Getty Images.

The marquee SEC matchup this week see’s Texas A&M travel to face a top ranked Georgia side. Texas A&M are a scary team to face, but at 7-3 are out of major contention. They are improving under head coach Jimbo Fisher, but likely need another year to grow.

Georgia have recovered expertly since losing to South Carolina, bringing a focus that has returned them to the top four. A win here against a good opponent will solidify them in fourth. Jake Fromm has been solid and the defense is very good, so Georgia should win this one.

The quarterback always gets the majority of attention in football. but for this Georgia team D’Andre Swift is the difference maker. The running back is arguably the best in college football, and often leads this offense.

He has top 20 stats this year, but his impact is much more important than the stats suggest. He has been helped with a good offensive line, and is almost certainly a first round pick in the 2020 NFL Draft should he declare. He will be key for Georgia this weekend.

Texas travel into Baylor for a rivalry game with massive implications. This Big 12 showdown is tough to call, with both teams evenly matched. Baylor heads the conference at 9-1, and has home advantage, but some have questioned their strength of schedule.

Texas has been wildly inconsistent this year, capable of matching number one LSU at times and at others losing to unranked Iowa State. If Texas performs at their best they can cause an upset, but away from home it’s tough to predict which Texas team will show up. 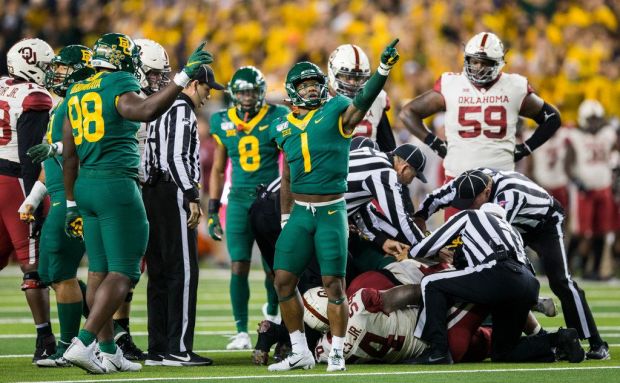 Baylor players celebrating a fumble recovery last weekend against Oklahoma. This game was a tale of two halves for Baylor. Photo: Ashley Landis/DallasNews.

This week is a key game for Baylor, for a variety of reasons. The team were unlucky last week as they fell in tough circumstances to Oklahoma. The unbeaten season ended thanks to blowing a 25 point lead in the second half. This loss is especially tough to come back from.

The game also has massive implications for the Big 12. If Baylor can win this game they remain top in the Big 12, but if they lose they will fall out of contention. After tough games against TCU and Oklahoma, can Baylor rebound with a statement win this week?

Michigan have improved massive after a slow start to the season, but face a tough test travelling to Indiana. The Wolverines will go into this as favourites, but Indiana are tough to discount. The home side are only game back from Michigan at 7-3.

Michigan will have to play at it’s best to win this one, and with their rivalry game with Ohio State next week they might have one eye on next week. This will prove costly as Indiana have enough talent to punish them and bring them back down to earth before their matchup next weekend.

8) Best of the Rest Games

25th ranked SMU travel to face Navy, who are reeling from a blowout loss to Notre Dame last weekend. SMU were brought back to earth with a loss to Memphis, and Navy will be no pushover for them. UCLA travels to USC, in a game difficult to predict. UCLA have been poor this season at 4-6, but 23rd ranked USC are wildly inconsistent.

TCU played Baylor tough two weeks ago, and now travels to face 9-1 Oklahoma. The Sooners need to win out to remain in contention for a play-off berth, but TCU has a good defense that can cause them problems.

Oklahoma quarterback Jalen Hurts has looked transformed since transferring from Alabama. They need to win out the rest of this season. Photo: USA Today Sports

The picture is clearing up for Alabama quarterback Tua Tagovailoa. After undergoing hip surgery on Monday, he is now expected to be cleared for athletic activity in three months time. It’s remains unclear when he will be back throwing footballs, although at this stage it is likely to be after the NFL Scouting Combine in February.

Despite the injury he is still expected to declare for the 2020 NFL Draft, and should be a first-round pick still unless further injury news comes out. Tagovailoa is a tough loss for Alabama, as they needed him to try and help get them back into the national championship hunt.

The college football play-off rankings were unveiled this week, with no changes in the top seven. That means LSU remains on top, with Ohio State, Clemson and Georgia rounding out the play-off places. Alabama and Oregon remain fifth and sixth.

Minnesota’s loss to Iowa drops them from eighth to tenth, moving Penn State and Oklahoma up. Florida, Wisconsin and Michigan are next up, moving past Baylor and Auburn in 14th and 15th. Iowa State is the big mover to 22nd after knocking off 19th ranked Texas last weekend.

That wraps up my preview of week 13 of the college football season, it will no doubt be another exciting weekend of action. If you have any thoughts on this piece either comment below or find me on Twitter @JWjournalism. Finally, a massive thank you to everyone who read this blog I massively appreciate it!