The GTLM class is arguably the most competitive of all classes in the IMSA WeatherTech championship, and 2018 should again see no quarter given as nine cars from five factory supported manufactures will do battle. Last year saw Ford claim the spoils, with seven cars finishing on the lead lap showing how competitive this class is. This year see’s renewed input from BMW and Porsche, with choosing a winner for this class virtually impossible. If you have missed my first two prototype class previews, you can find them here. Part 1  Part 2

Let’s look at the class field, which may lack in numbers but certainly not in overall quality.

The defending GTLM class champions return with an unchanged line-up this year, unsurprisingly. The Pratt & Miller run Corvette racing programme are one of the slickest operations in the IMSA paddock, and have been a competitive factory GT outfit since the turn of the millennium.

Three wins last year, including the Sebring 12 Hours, secured the GTLM title for this #3 crew, something they will look to repeat this year. Both Garcia and Magnussen are vastly experienced in the C7.R and and have the pace to challenge at the front in the class. Audi DTM racer Mike Rockenfeller returns once again after joining the team last year, and provides added pace to an already strong line-up.  Fifth in the pre-race test for Antonio Garcia does not indicate strong pace, but Corvette racing should recover come race week.

2017 was a down year for this always successful #4 crew. Full season drivers Oliver Gavin and Tommy Milner only secured one class win, but should bounce back in 2018. Their previous success has meant GM has retained the duo for this year, with Swiss Audi factory driver Marcel Fassler returning once again to bolster the endurance line-up.

Gavin looked impressive in the pre-race Roar test, securing the second fastest time, 0.3s quicker than their team mates. Both the Corvette Racing entries are formidable opponents for their rivals, and their consistently strong results year after year show this team is one of the best in business.

BMW have a much increased involvement in GTE class racing with a new M8 GTE car for this year. They have expanded into the WEC for this year, alongside their long running IMSA GT factory programme. The team have encountered some expected new car troubles, but the team will not be using that as an excuse during the race.

John Edwards has been a long-term BMW factory IMSA driver, and for the full season is joined by Jesse Krohn, who has impressed in the GTD class in recent years. Joining them for Daytona are WEC racers Nicky Catsburg and Augusto Farfus. All four are very quick drivers, the only question mark for this team in a highly competitive class is their new M8 car. 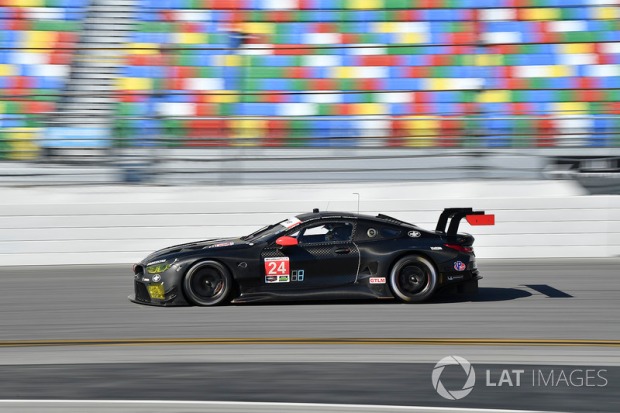 The second of the factory BMW entries has another all-star cast of factory drivers, with Alex Sims joined by new signing Conor de Phillippi for the full season. Sims was very quick in the old M6 last year and Phillippi was a standout in the GTD class in an Audi R8.

Long term factory pilot Bill Auberlen has stepped back into an endurance-only role this season, and Philipp Eng has proved very quick with various customer teams in the GT3 spec M6. As with their other entry their result will depend on the new M8 GTE and its reliability. Ford hit the ground running with their GT several years ago, so anything will be possible for the German marque.

This family run factory supported team return for a partial campaign this year, after an abrupt end to their 2017 season after the Le Mans 24 Hours. They return to Daytona after finishing a close third in the Rolex 24 last year.

On the driving front the team have 2017 WEC GTE Pro champions James Calado and Alessandro Pier Guidi, with fellow factory drivers Toni Vilander and Davide Rigon  completing the line-up. Rigon was a late addition and missed the pre-race test, but he has enough experience of the GTE spec Ferrari.   This is a seriously strong line-up of Ferrari GT talent, although they did appear to struggle for ultimate pace at the test. The fact this is a one-car team may hinder them against their well stocked factory opponents, but this team will be pushing them all the way in the race.

The factory Ford GT programme enters its third year, but already has claimed some major honours. This #66 car claimed GTE Pro victory at the Le Mans 24 Hours in its debut year, and claimed the GTLM Rolex 24 class victory last year.

The team retain an unchanged line-up, of full season drivers Joey Hand and Dirk Muller, with Indycar racer Sebastien Bourdais joining them for the endurance rounds. All three are very quick in this Ford GT, and with Bourdais having firmly put his severe Indy 500 practice accident behind him, the team will be hoping their good form can extend into a third year. A fastest time at the Roar test is a good omen for this #66 team.

This #67 crew have been forced to watch on as their teams other entry has claimed major successes across the world for the past two years. They seem to have attracted the majority of the teams bad luck in that time, because in a straight fight they are evenly matched with their intra-team rivals.

Ryan Briscoe and Richard Westbrook are a very talented pairing, with multiple Indycar champion Scott Dixon a very strong third addition to the team. Ryan Briscoe set the third fastest time at the test, and with the top six cars separated by only a second this class battle will be on for the entire 24 hours. 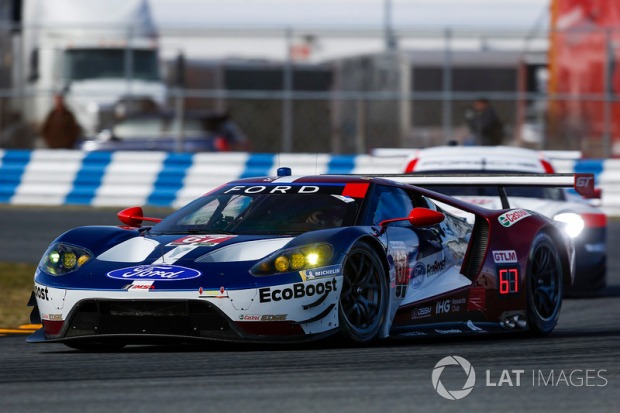 This CORE Autosport led factory Porsche GT outfit enter the second year of their new mid-engined Porsche 911 RSR car. With their withdrawal from the LMP1 class Porsche have put renewed investment into their GT racing across the world, something that is shown with their IMSA programme.

Patrick Pilet returns, but has a new team mate this year with LMP1 racer Nick Tandy moving across to replace Dirk Werner, who likely moves across to the WEC. Joining them for the long distance rounds is WEC GT racer Frederic Makowiecki. Last year this team were the closest challengers to the winning #66 Ford entry this year, and with a renewed emphasis on GT racing can they go one step further this time around.

The #912 car in the hands of Earl Bamber was the fastest of the two Porsche’s at the pre-race test, showing they are definite contenders for victory. The #912 crew struggled last year, with only two class podiums and no wins across the year.

The team retain the very quick Belgian Laurens Vanthoor for his second season with the team, with former LMP1 factory driver Earl Bamber coming across to IMSA as his new full season team mate. Italian Gianmaria Bruni rejoins the team for Daytona after a truncated 2017 season.

That wraps up my preview looking at the fiercely competitive GTLM class. It’s not an exaggeration to say that any one of the nine entries could win this class, and expect the class lead battle to go on for the entirety of the race.

I want to say a massive thank you for anyone who has read this article and I hope you enjoyed it. If you did, feel free to comment, like or share. I have to say a final massive thank you to Motorsport.com for their high quality photos which grace this page. For all the latest motorsport news please visit their website.  You can find me on Twitter @brfcjordan95.

Coming up next is a two-part preview of the GTD class. Stay tuned!