Arsenal are a football club currently in crisis. They sacked manager Unai Emery two weeks ago, yet the club does not appear to have a succinct plan to replace him. There has been talk of a laundry list of 12-15 candidates in mind, showing a lack of forward planning from the owner and the board.

Fans and pundits seem split on who is the right candidate for Arsenal. Some want a big name like Max Allegri or Carlo Ancelotti, others want a former player like Patrick Vieira. Some are calling for a younger, more progressive coach like Julian Nagelsmann. With so much confusion surrounding this, I thought I would do a quick piece looking at some of those linked with the job, and some I would like to see at Arsenal.

Ancelotti has been heavily linked with the Arsenal job since his sacking from Napoli last week. The Italian is a household name with an incredible resume filled with success everywhere he’s been.

He has experience of the Premier League from a two-year stint at Chelsea, however some question whether he is right for Arsenal. He is 60 years old and turning around a club in crisis is something he has little experience of. He is also being heavily linked with the Everton job, so the club would need to act quick if he’s their man. 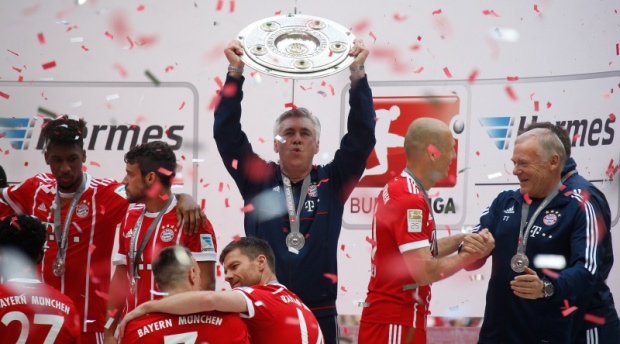 Ancelotti’s last major title was the Bundesliga with Bayern Munich in 2017. Some also question whether he could turn Arsenal around? Photo: CarloAncelotti.it

Allegri is a name fans were calling for 18 months ago when it was announced Arsene Wenger was standing down. The Italian enjoyed incredible success at Juventus, dominating domestically and twice reached the Champions League final.

Since leaving Juventus in the summer he has taken time away from the game, a move that could go either way in his next job. He has admitted to taking English lessons, however Emery’s poor English showed how much it can hinder a manager. He would be a good appointment, but would he want this job right now?

Max Allegri celebrates his fifth successive Serie A title with Cristiano Ronaldo. With their current malaise would he want the job? Photo: Giampiero Sposito/Getty Images.

Arteta has been heavily linked with the job over the weekend after it appears he met with the chief executive. The current Manchester City assistant was a contender for the job last summer, so it’s clear the current regime at Arsenal are very high on him.

That he played almost 150 games for the club between 2011 and 2016 only enhances his chances, as Arsenal would love to replicate the attacking style Manchester City play. He would be a risky appointment with his lack of managerial experience, but having learned under Pep Guardiola, who worlds best manager, he could be a risk worth taking.

Mikel Arteta has learned under Pep Guardiola at Manchester City, has his time come for his first managerial job. Photo: Nathan Stirk/Getty Images.

Club legend Vieira was an early contender for the job, with fans and pundits using the example of Frank Lampard at Chelsea and Ole Gunnar Solskjaer at Manchester United. The Frenchman would have a lot of fan support, however he lacks managerial experience.

He did well at New York City FC, but his results at Nice have been mixed. They have started the season slowly, currently 13th in Ligue 1. He would be a good story at the club, although many will question whether the step up is too soon for Vieira considering the mess Arsenal are currently in.

Vieira is a club legend at Arsenal, but has had mixed success at Nice. Could the step up to Arsenal be too big given their current state. Photo: Jean-Francois Monier/Getty Images.

Nagelsmann is one of the hottest young coaches in Europe, having proved his credentials in the Bundesliga. He took his first club Hoffenheim from the relegation zone to the Champions League in two seasons, before joining RB Leipzig this summer.

Leipzig currently top the Bundesliga and play exciting football with a team filled with young talent. Reaching the round of 16 in the Champions League shows his skills translate to Europe also. He would be tough to tear away from Leipzig, but would be a statement of intent from the Arsenal hierarchy.

Nagelsmann has revitalized RB Leipzig since the summer, having established them as Bundesliga title contenders. Photo: DPA/A.Gora

Not well-known in Europe, Gallardo will no doubt soon get his chance. The Argentinian has enjoyed tremendous success at River Plate, with two Copa Libertadores titles and a final appearances in five years.

He is still young at 43 and is fully deserving of a chance in the top five leagues of Europe. It would be a bold choice to appoint him, but so was hiring Arsene Wenger in 1996. He may need time to develop, but will Arsenal see it as worth the risk to be too soon rather than too late with appointing him?

At the moment it appears Arteta is the favourite for the job, so who do you think should be the next Arsenal manager? Let me know in the comments section below or find me on Twitter @JWjournalism. Thank you for reading this piece, I really appreciate it!