Leadership. Something that has been lacking both on and off the pitch for a long time at Arsenal football club. There are multiple parties worthy of equal blame, it’s not simply the players just because they are the ones we see every week. It starts from the top down, in a toxic trickle down effect.

First of all, let’s start at the top, with the owner Stan Kroenke. Since 2011 he has been the majority shareholder at Arsenal and the nickname “Silent Stan” underplays his involvement in the club. He rarely attends games and leaves the day-to day running of the club to son Josh.

Although Stan will get regular updates his distance restricts his knowledge on what is going on surrounding the club. After eight years in charge it’s clear he has a part to play in the clubs steady decline during his ownership. The team have dropped from a Champions League to Europa League side.

A rare sight of owner Stan Kroenke at an Arsenal game. The lack of leadership at this club starts with him. Photo: Getty Images.

In the last three years the club has been undergoing a transitional phase, with multiple obvious errors made in this period. Firstly, the club backed themselves into a corner with star players Alexis Sanchez and Mesut Ozil. By letting their contracts go into the last six months made no business sense, and for a usually prudent club it cost them tens of millions of pounds.

The club sent Sanchez to Manchester United for Henrikh Mkhitaryan, in a deal that would prove terrible for both sides. The club then caved and gave Ozil and new three-year extension, making him the highest ever earner at Arsenal with £350 000 a week. His six goals and five assists in the first 18 months of this deal show what a poor decision this was.

Hindsight is a beautiful thing, and now it’s easy to say the appointment as Unai Emery was a mistake. At the time I personally for example was positive about the appointment. In his tenure the team lacked identity and was overly cautious. He wasn’t able to get the best from the players. 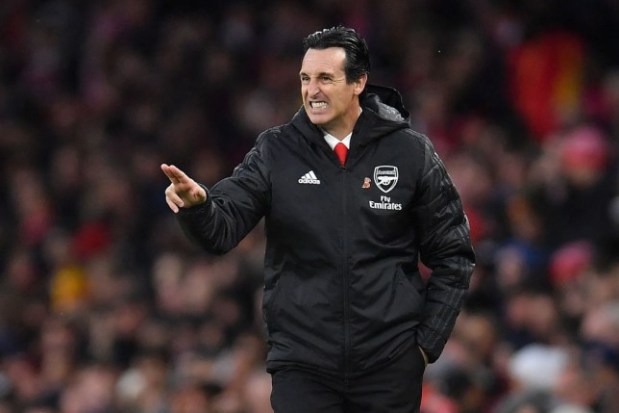 This pained expression was a regular one for Emery in his last months at Arsenal. His tenure put Arsenal in reverse. Photo: Getty Images.

Going without a win in nine games against the likes of Norwich, Brighton and Southampton showed the dire straits the team was in. His sacking two weeks ago was inevitable, with his tenure pulling Arsenal backwards as every one else takes forward steps.

Having not learned their lesson from Sanchez and Ozil the year before, the club told Aaron Ramsey they were withdrawing a contract offer as he didn’t fit their future vision. His drive and skill in midfield has been a major miss for Arsenal this season, with the team struggling in his absence to both score goals and remain solid defensively.

The clubs recruitment in recent years have also been very hit and miss. For every Pierre-Emerick Aubameyang, Bernd Leno and Matteo Guendouzi there’s less convincing signings like Sokratis, David Luiz and Sead Kolasinac. The debacle with Granit Xhaka and the fans earlier in the season just typified a club lacking leadership. Both sides came out of it looking bad.

Arsenal captain Granit Xhaka showing his frustration at fans earlier this season. It wasn’t a good look for the captain, and his days seem numbered at the club. Photo: Getty Images.

After the Emery sacking reports have come out of a roll-call of potential 12-15 candidates. As a Arsenal fan it pains us to give Tottenham any credit, but look at how they dealt with their manager sacking. The got rid of the well respected Mauricio Pochettino because of poor form, appointing Jose Mourinho less than 12 hours later. It’s clear they had a pre-arranged plan in place and secured their manager quickly.

At Arsenal we don’t yet know two weeks later if interim manager Freddie Ljungberg will be in charge until the end of the season. Whilst it is good the club is taking their time to make the right appointment, the results under Freddie haven’t improved much from Emery’s reign.

Many top line managers have been linked such as Pochettino, Max Allegri or Carlo Ancelotti, but I think Arsenal need a younger, more progressive manager to guide them through this crisis. Ajax manager Erik ten Hag would be a great choice, however with our relative position right now he is likely out of our range.

Attainable managers that would fit the progressive mould would be the likes of Julian Nagelsmann at RB Leipzig and Marcelo Gallardo at River Plate. Both have enjoyed tremendous success, and both would be a risk worth taking for their potential. An outside contender could be Gian Piero Gasperini of Atalanta.

They stole the headlines this week in the Champions League, and the job he’s done to take a small club to the knockout rounds of the worlds premier club competition is remarkable. All three are less well known then the likes of Poch and Ancelotti, however think back to 1996. Arsenal Wenger was a left-field, unknown when he took the Arsenal job.

The board and owner need to be on the same page to ensure the next Arsenal manager is the right one. They then need to make sure recruitment is improved to ensure the same issues don’t happen on the pitch. It’s then up to the players to play to their standard and lift this club back into the top four. It will be a difficult task to resurrect Arsenal, but waking a sleeping giant always is.

What are your thoughts on this piece? Let me know in the comment section below or find me on Twitter @JWjournalism. Thank you everyone for reading this post, I would really appreciate it!