This past weekend saw yet more action from the college football world, with some big wins for top ten programs, a lopsided rivalry game and a Saturday night shootout. Entering November the end is in sight for the contenders, yet there is still plenty of potential banana skins should they struggle. Let’s take a look at the main talking points from this past weekend.

The self-titled “World’s Largest Outdoor Cocktail Party” was won by Georgia for the second year running, overcoming a resilient Florida side 24-17. The scoreline suggests it was a close game, but Georgia always looked fairly comfortable.

Both teams defense’s stood out, with the key to victory being Jake Fromm and the Georgia offense. D’Andre Swift had another good game, and his running opened up the rest of the offense. The game was not without it’s controversial moments, but Georgia passed this huge test against a good Florida team.

2) Georgia Win Massive for Their Season

Beating Florida was a must for Georgia, who have recovered well since losing to South Carolina two weeks ago. This win solidifies them atop the SEC East, and was vital to remain in play-off contention.

Georgia rose to sixth in the AP Top 25 after this win, but they face a tough end to the season. They travel to 12th ranked Auburn and host a good Texas A&M team. To get into the play-off places they must win out and hope those above them slip up. 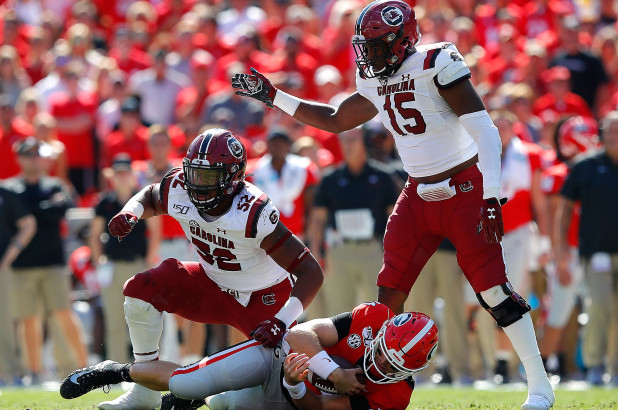 Georgia have responded well since this crushing loss to unranked South Carolina two weeks ago. They need to win out to remain in play-off contention. Photo: Getty Images.

The Trojans have been inconsistent all season, and they laid an egg in this one. True freshman Kedon Slovis threw three picks, and were dominated as the scoreline suggests. Oregon are going to win the Pac-12 North, with USC now almost certainly out of contention for the Pac-12 South at 5-4.

4) Tough Times Ahead for USC

The USC Trojans are one of the legacy programs of college football. They have won eleven national titles and have produced the most NFL Draft picks of any school. 2019 has not been kind to USC however, as they appear to be heading towards a crisis.

Earlier this year Athletic Director and former storied player Lynn Swann resigned, and now it appears likely head coach Clay Helton will be fired at the end of the season too. At 5-4 they won’t win the Pac-12 South, and their 2020 recruiting class is currently ranked 66th, and 10th in the Pac-12. The future doesn’t look bright for USC.

The entertaining game of the weekend was undoubtedly this AAC Saturday night matchup, with Memphis outlasting SMU 54-48. Both Quarterbacks combined for over 800 passing yards, as both defenses got torched.

Memphis came out on top, in a game they had the better of. All the talk heading into it was about SMU and their unbeaten record, well now Memphis has risen above them to 19th in the AP Top 25 polls.  Both teams have tough games ahead, with Memphis facing Cincinnati and SMU facing Navy as they fight for the AAC West.

SMU were the talk of the college football world last weekend, with a top 15 AP ranking and an unbeaten 8-0 record. With the national spotlight on them, they came up short in a tough matchup in Memphis. If they would of remained unbeaten all season people would of been speculating on a potential top ten ranking and prominent bowl game.

All of this is now over, as with one loss they have fallen dramatically. They have now dropped eight places to 23rd in the AP poll, and have surrendered control of their division to Memphis. With a tough game against Navy two weeks away, they need to regroup fast.

Both sides needed a win here to save their season, but only team played like they knew this. Miami dominated Florida State 27-10 in Tallahassee, however the scoreline doesn’t reflect how dominant Miami was. Quarterback Jarren Williams had his best game, passing for 313 yards and two touchdowns.

The Miami defense strangled FSU, containing star Running Back Cam Akers to 66 yards and sacking QB Alex Hornibrook nine times. The Hurricanes have been poor this season, but Florida State looked beyond help in this game. Both teams needs a lot of help to regain their former glory, but Miami was a class above in this game.

The repercussions were swift after this game, with Florida State announcing on Sunday they had fired head coach Willie Taggart. He was only halfway through his second season, but with a 9-12 overall record he was swiftly fired. The university alumni donated the $18 million dollar buyout of his contract,showing their contempt for him.

With the top three all on bye weeks, the focus shifted to those lower down the top ten. Ninth ranked Utah overcame a very tough trip to Washington 33-28, which extends their commanding Pac-12 South lead. 11th ranked Auburn made tough work of beating Ole Miss, with the 20-14 win in doubt right up to the final seconds.

The top five remain unchanged this week, as only fourth and fifth ranked Clemson and Penn State played. Georgia rise to sixth after their win against Florida, with Utah and Oklahoma moving up as the Gators drop to tenth. Baylor sneaks up to 11th at 8-0, as Auburn head the rest of the two loss teams in 12th.

Memphis is the big riser this week, going from 24th to 19th after their primetime win. Kansas State jumps past Boise State for 20th. The only new entry this week is Navy in 25th, with Appalachian State falling from 20th as their unbeaten season went in a 24-21 loss to Georgia Southern.

That wraps up my recap from week ten of college football, if you have any comments on this piece comment below or find me on Twitter @JWjournalism. Finally, a massive thank you to everyone who read this article I really appreciate it!