Nobody would have predicted when Audi first went to Le Mans in June 1999 with their two experimental R8R and R8C cars, that they would leave a legacy that would arguably be the most dominant in the sports history. This era has begrudgingly now come to an end with today’s announcement that Audi are to end their sports car effort  at the end of the season. But just how did the Audi brand become synonymous with Le Mans victory?

Expectations were low despite a huge four car entry comprising both the Audi R8R open cockpit car and the R8C coupe. Third and fourth overall in their first running showed their potential, yet very few people would have predicted what came in store next.

A new millennium came and with it was an era of complete Audi dominance in the sport. Returning with their revised R8 model,  a car that would go down in sports car racing as one of those revolutionary cars that change the sport, such as the Ford GT40 and the Porsche 956/962. 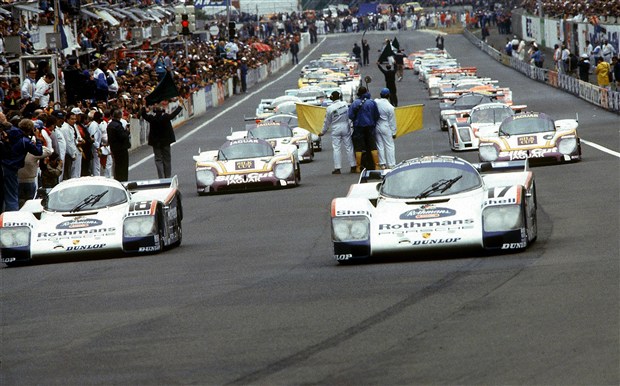 The Porsche 962 taking its customary place at the front of the field, circa Le Mans 1987. Photo copyright Porsche.

Despite manufactures such as BMW, Mercedes and Nissan all pulling out of the end of 1999, nobody questioned the dominance of their victory. They cruised to a 1-2-3 podium lock out, with a winning margin of 24 four laps over their closest competitors.

The 2001 edition would be a lot tougher victory, with extreme weather conditions and the loss of driver Michele Alboreto only months before the race made it an emotional one for the team. From here it was on wards and upwards, with another victory for the #1 driver line up of Frank Biela, Emmanuele Pirro and Tom Kristensen cementing their place in history as the first driver line up to win the race three years in a row.

The factory team pulled out after 2002, paving the way for sister marque Bentley to win comfortably in 2003. After this small hiccup the R8 returned to the winners circle in 2004 and 2005 in the hands of the privateer Japanese Team Goh and America’s Champion Racing. 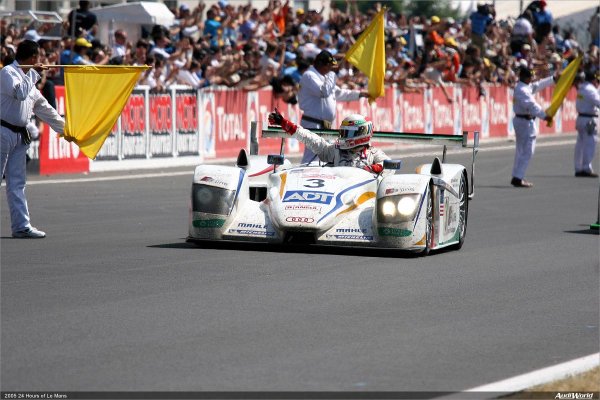 Tom Kristensen celebrating his seventh win and the final victory for the iconic Audi R8, 2005, the end of an era. Photo copyright AudiWorld.

The R8 will not go down in history as simply a fast car, it was designed to make mechanical issues a lot quicker to fix. It was the first sports car to have this design philosophy and therefore it always had a huge advantage over the rest, because of how little time they would spend in the pit lane.

2006 would herald a new chapter in the Audi story, with the factory returning to Le Mans with an brand new diesel powered R10 TDI. It was the first of its type and would become the first ever diesel powered car to win Le Mans. This was a feat they managed to repeat in both 2007 and 2008, despite opposition from a strong Peugeot manufacture presence.

2009 woulds prove that Audi were human when their new R15 TDI proved uncompetitive at Le Mans thanks to issues with it’s radiators. 2010 and 2011 would provide epic battles with Peugeot as Audi introduced first the R15 Plus and then the R18 TDI, their first closed cockpit car since the initial R8C in 1999. 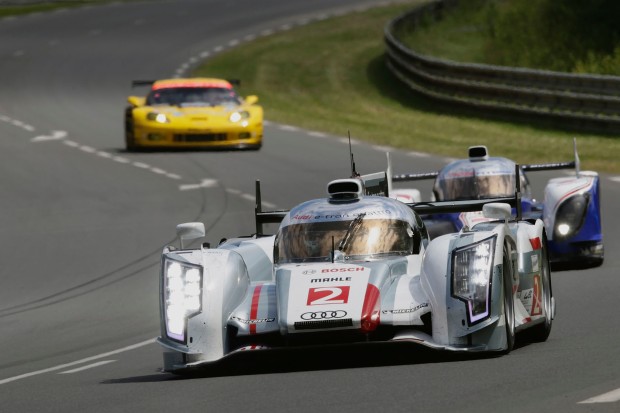 2012-2014 would bring a further string of victories as they introduced hybrid power into their prototypes. The return of sports car legend Porsche in 2014 provided a mouth watering prospect for everyone involved, but unfortunately it would not be able to live up to high expectations.

Both Audi and Porsche would never both be truly competitive over the three years, with Porsche winning the mini-battle 2-1 in terms of Le Mans wins. Audi this season have proved to be fast but fragile, not a usual characteristic of theirs. Rumours have persisted for most of the season questioning whether they would return in 2017, and today we had the answer.

Whilst I’ve looked back at the success of Audi between 1999 and this year, just looking at their 13 Le Mans 24 Hours victories doesn’t accurately judge their dominance. They had an unbroken podium streak every year they competed at Le Mans, but it wasn’t just in La Sarthe where they ruled the roost. Both the Audi factory programme in the American Le Mans Series and with privateers in the European series, they were to prove dominant for over a decade. 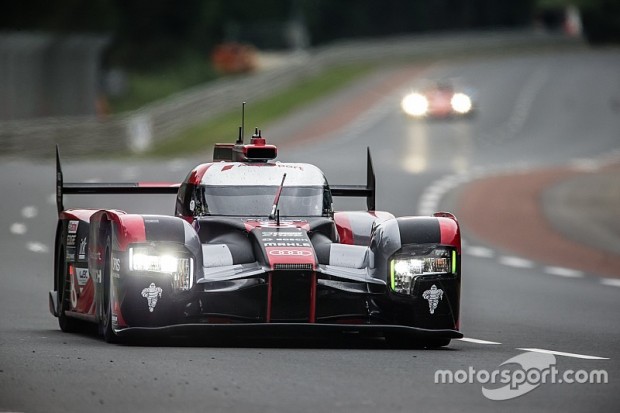 Audi’s final Le Mans challenger went out with a whimper. A fortuitous third place doesn’t represent their era in sports car racing, but for now this is the last we will see a factory Audi at the worlds greatest motor race. Photo copyright Motorsport.com

They have won every significant prototype race on the planet multiple times, and with success as far as the notorious Sebring 12 Hours in Florida right up to their victory in the ALMS Race of Two Worlds at Adelaide in 2000. To try and put into words the level of dominance Audi have had on sports car racing since 1999 is impossible to put into words.

Looking at simply their results doesn’t do them justice. To speak to everyone past and present in the paddock during their period in the sport, would help to tell you one thing. They would all likely say, quite simply, Audi completely changed sports car racing as we know it. Their level of dominance is one that will live in history and will likely prove unmatched for a very long time.

Thank you Audi for an incredible 17 years in the sport, sports car racing owes a lot to their commitment to the category. Quite simply, Le Mans 2017 will be plain weird without them there.

Any thoughts on Audi’s dominance of sportscar racing? Feel free to share your comments below, I would hugely appreciate it. Thank you for reading.