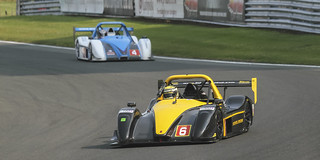 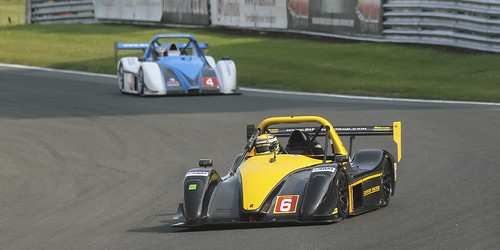 After the lunch break, the first race was for the Radical Clubman’s Cup, a stepping stone in the Radical progression from the entry level SR1 cup to the higher profile SR3 Challenge or even European Masters series. Although the grid was not the biggest last weekend the series always provides close racing and plenty more was expected from their two races over the course of the day.

After qualifying it was Dan Vaughan in his SR3 that was on pole, from young hot shoe Oskar Kruger in his smaller PR6 model. Row 2 consisted of Steve Burgess in his SR3 from Brian Caudwell in a similar SR3 in 4th. From the start it was Kruger who made the best start although he was challenged for the lead by the fast starting Ben Dimmack, up from 8th on the grid, although some questioned whether he made too good a getaway. Into Quarry things got frantic however as 5 cars collided, although several were able to continue. The amount of stranded cars left the organisers with no option but to red flag the race to allow the stranded cars to be recovered safely.

After a 10 minute delay the cars began to line up on the grid again for the re-start, which had now been cut from 20 minutes to 15 in order to try make up time for the Castle Combe Saloons to have their race at the end of the day. At the re-start things carried over with Kruger quickly demoting Dimmack from the lead at the Esses on the opening lap. Kruger was clearly on a mission as he built up a lead of several seconds over the next few laps, and things got even more comfortable for him when news filtered through on lap 4 that 2nd man Dimmack was to have 10 seconds added to his race time for a jump start.

From the mid race point the depleted field were evenly spread out until the finish as Kruger came through for a comfortable victory, from Brian Caudwell in 2nd whilst the time penalty for Dimmack demoted him from 2nd on the road to 3rd in the overall result. John Macleod came home 4th in his SR3, whilst Brian Murphy and Richard Stables completed the top 6 from a truncated opening Radical Clubman’s Cup race.

For the second race later on in the afternoon, the grid was back up to full strength after the multi car accident in the opening race, with the front row order reversed this time around as the opening race winner Oskar Kruger claimed pole from Dan Vaughan, whilst similarly to race 1 Steve Burgess was 3rd from Brian Caudwell completed row 2. At the start it was Kruger and Burgess who made the best getaway’s to take an initial lead in this once again reduced to 15 minutes race.

Race 1 standout Ben Dimmack was at it again in race 2 as he came through to an initial 2nd place, although by lap 4 Burgess was beginning to seriously challenge Dimmack for the place as Kruger sprinted away into the distance up front. Dan Vaughan made a bad start and spent the early portion of the race attempting to make up some of the lost ground. His challenge for 4th place ended in tears on lap 6 as he passed John Macleod for the position before almost simultaneously spinning at the Esses, and into subsequent retirement.

The Safety Car was immediately deployed on lap 7 as it was deemed the car was in a dangerous position, although it only took 2 laps to recover the car before the Safety Car went in again. From here Kruger picked up where he left off before the Safety Car as he quickly restored a lead of several seconds over the rest. Behind Kruger Dimmack was had to defend courageously against Burgess behind him, although on the penultimate lap exiting Camp corner Burgess found a way through on the inside to claim 2nd, a position he would hold to the flag. Kruger was again dominant as he took a second victory of the day from Burgess and Dimmack. John Macleod came home for double 4th place from Brian Caudwell in 5th and finally Brian Murphy who completed the top 6.

These races were entertaining for the spectators although a few more cars on the entry list would have really enhanced the races last weekend, although in peak holiday season a dip in a usually much larger entry list is to be expected. All of the MSVR series who raced at Castle Combe last weekend would definitely be welcomed back by the spectators next year.

Credit for the excellent photos go to

For more information in this series please visit their website through the link below
http://www.radicalsportscars.com/au/?loadnews=regional