This weekend of college football will provide plenty of answers for teams and fans, with a multitude of marquee games as we begin to see who is the real deal and who is faking it. Let’s take a look at the main talking points for this weekend’s slate of games.

This top ten matchup is the biggest game of the weekend. Third ranked Georgia face seventh ranked Notre Dame in Athens. The last matchup was a close 20-19 win in 2017, and was Jake Fromm’s coming out party. Two years down the line and both sides have have eyes on the play-off.

Fromm, now a junior, is a top level quarterback at this level, and with support from the likes of running back D’Andre Swift has plenty of weapons. Notre Dame QB Ian Book has started the season hot, and his dual-threat ability makes him dangerous to this Georgia defense.

Quarterback is the most important position in the sport, so a big factor in deciding this game will be the play of the two signal callers. Fromm has the higher profile, having led Georgia to the national championship game as a freshman. He has since developed into a future first round NFL Draft pick.

Ian Book isn’t talked about as much by the media, but has quietly developed into a very good QB for the Fighting Irish. Like I mentioned above, the senior QB has started hot this season, with 553 yards and 6 TD’s to 0 INT’s in his opening three games.

Jake Fromm was only a true freshman in his first start the last time Notre Dame played Georgia. Now they face off with play-off ambitions for both. Photo: Zach Bolinger/Icon Sportswire.

Another massive game this weekend is this Michigan and Wisconsin matchup. Both sides are ranked just outside the top ten at 11th and 13th respectively, with a win providing a big step into the top ten.

Both sides are 2-0, but Wisconsin has looked more convincing against limited competition. Having home field advantage only enhances their tag as slight favourites. Running back Jonathan Taylor is a stud who will give Michigan problems, with the return of their best lineman Jon Runyan likely to enhance Michigan’s offensive play.

4) Can Jim Harbaugh Get His Statement Win?

The pressure is mounting on head coach Jim Harbaugh after his side have started the season slowly. Allowing Middle Tennessee to score 21 at home and escaping Army in overtime doesn’t bode well going into a tough Wisconsin matchup. He has a good recent record against them, but this could be their best opportunity for revenge.

He hasn’t been helped by injuries to key players like left tackle Jon Runyan and receiver Donovan Peoples-Jones, but they have enough talent to be a top ten side. Quarterback Shea Patterson has struggled, with the running game solid but not spectacular.

The big games just keep coming this weekend, with a massive matchup for these historic programs. Eighth ranked Auburn travel to College Station to face the 17th ranked Aggies.  Auburn already have a statement win this year against Oregon, but this game could make or break Texas A&M’s season.

Led by true freshman Bo Nix, Auburn surprised some by beating Oregon opening weekend, however this is another massive test. Texas A&M have already lost to Clemson, with another defeat here will take them out of contention for major honours. 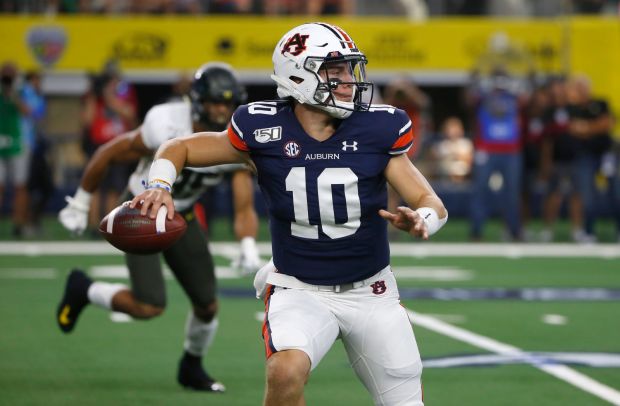 Bo Nix led Auburn to a comeback win in his debut for the Tigers. As to be expected with a true freshman, he’s struggled slightly with the adaptation to top level college football. Photo: Ron Jenkins/AP Photo.

Bo Nix responded to immense pressure with a clutch comeback win against a good Oregon side in his debut, with this another massive test. Starting a true freshman on the road in a tough environment in College Station is always tricky, with the stats giving little confidence either

Nix is 83rd in the nation for passing yards, and his leading receiver after three games is Eli Stove with 133 yards. The offense has leaned on running back JaTarvious Whitlow, as they try to help Nix as much as possible. Nix will need to step up if they want to win this game.

7) Other Games to Look Out For

Below these top level games there are plenty amongst the slate that will pique fans interest. Tenth ranked Utah open the weekend with a trip to California to face a wounded USC team. Utah have looked good so far but USC will look to rebound from their OT loss to BYU last weekend.

Speaking of them, BYU hosts 22nd ranked Washington. Both sides already have one loss and another this early in the year could really pull the pin on their seasons. 3-0 Oklahoma State travel to Texas to face the 12th ranked Longhorns. This could be a banana skin for Texas.

8) Names to Look Out For

All three games have star players with NFL potential, starting with Utah RB Zack Moss. He isn’t known nationally, but has developed into a very good player with mid-round NFL potential. 373 yards in three games shows the good start he’s had.

For BYU and Washington it’s hard to look past Washington QB Jacob Eason. The Georgia transfer has plenty of hype and has so far delivered. Seven TD’s to one interception and is averaging just under 300 yards a game. Another QB to look out for is Texas Sam Ehlinger, who has impressed despite a tough loss to LSU. His stats are incredible and is cementing himself as an NFL prospect.

9) Wider Play-Off Implications for This Week

The weekend ahead will have wider reaching consequences for the College Football Play-Off. Starting with the Georgia and Notre Dame game, if the Fighting Irish win they could vault into the top four. Their toughest remaining matchup’s would be against Virginia and Michigan, two games they would go into as favourites.

If Auburn beat Texas A&M, that would be two wins against ranked sides and would surely push them to the cusp of the play-off. Whoever wins in the Michigan – Wisconsin game will likely jump into the top ten, and another Utah win will see them rise also.

We’ve already mentioned some key players to focus on this weekend, but here are some of the pivotal players for the leading matchup’s. We’ve mentioned Jake Fromm, but the Georgia offense is led by RB D’Andre Swift, who is averaging a massive 9.4 yards for the season.

For Notre Dame this could be a Chase Claypool coming out party, the receiver leads the team with 190 yards in two games.Jonathan Taylor will be a focal point for Wisconsin, while Michigan running back Zach Charbonnet will be glad to have left tackle Jon Runyan back to help the freshman.

That wraps up this preview for what will be an exciting week of college football. If you have any comments on the talking points I’ve mentioned, let me know in the comments section or find me on Twitter @JWjournalism. Finally, a massive thank you to everyone who read this article I really appreciate it!

Going into the 2014 NFL Draft may were hailing the best Quarterback draft class in a long time with 4 consensus 1st round QB’s with plenty more following on in the 2nd and 3rd rounds. Things initially started well as the Jacksonville Jaguars shocked the nation by selecting Blake Bortles with the 3rd pick of the 2014 NFL Draft, making him the first QB taken. From this point however the stock of the Quarterback has nosedived with the first warning signs being the fall of media darling and consensus top QB in the draft, Johnny Manziel. On draft night he fell from being a consensus top 5 pick to eventually be selected with the 22nd pick by the Cleveland Browns.

From the predicted four 1st round QB’s only one more was taken with the Minnesota Vikings trading back into the 1st round with the 32nd and last pick to select draft free faller Teddy Bridgewater of Louisville. At this point the fortunes of the Quarterback had been mixed in the 1st round with Bortles and Bridgewater being picked far before they were predicted to have been, yet fellow 1st round talent Derek Carr was forced to wait overnight for his time to be drafted.

Friday night saw the 2nd and 3rd rounds of the draft with plenty more QB’s expected to be drafted during the course of the night. The first off the board in the 2nd round was unsurprisingly Fresno State’s Derek Carr who took his cannon arm to Oakland where he can learn from Matt Schaub before eventually replacing him at the Raiders. With Carr off the board who was going to be next was open to debate. Some felt it was the pro ready Jimmy Garoppolo from Eastern Illinois whilst others fancied LSU’s Zach Mettenberger.

After a long while and plenty of Quarterback needy teams passing on a new signal caller eventually it was a surprise selection as the New England Patriots selected Jimmy Garoppolo with the 62nd pick late in the 2nd round. This seemed a slightly strange selection at first as the team has future Hall of fame Quarterback Tom Brady as the starter with impressive backup Ryan Mallet behind him in the depth chart. It was soon worked out however that Garoppolo is an insurance policy against Mallet potentially leaving as this is the last year of his rookie contract and is highly regarded around the NFL.

Going into the 3rd round it was expected that we would see a flurry of QB’s taken in this round as the value on these falling draft prospect would surely be irresistible to the many Quarterback needy teams in this draft. What actually happened was quite the opposite as no QB’s were selected at all in the 3rd round meaning there are plenty of signal callers who have to wait until today before being drafted.

For many it appears injury and poor combine/pro day performances are the reasoning why they remain on the board going into the 4th round. For Zach Mettenberger this is definitely the case as he must be frustrated to fall from a 2nd round prediction to falling into the 4th round, although this may be because of recent revelation about a diluted drug test at the scouting combine in February. Indeed on draft expert Mike Mayock’s board Mettenberger is rated above Teddy Bridgewater who went in the 1st round.

For other QB’s such as Alabama’s AJ McCarron it appears many NFL teams doubt he can be a regular winning QB in the NFL despite have an exemplary record of success whilst in college at Alabama.He will be a huge value pick if he falls below the 4th round today. The next rated QB is Pittsburgh’s Tom Savage who appears to have one of the biggest arm’s in the QB class with many tipping him to sneak into the 2nd round and expect him alongside McCarron to be selected in the 4th round.

For the likes of Aaron Murray of Georgia injury has curtailed his draft stock, expect him to be selected late in the 4th round/early 5th round . From the other Quarterback’s in this draft the likes of Logan Thomas from Virginia Tech, Tajh Boyd from Clemson and Stephen Morris from Miami expect these guys to be drafted in the later rounds or might even go undrafted as they are purely developmental Quarterback’s who need several years of development before they could be challenging for starting QB slots in the NFL. It should be very interesting to see where these young signal callers are all selected today in the final day of the 2014 NFL Draft.