The 12th May 2012. Borussia Dortmund are a club in a state of ecstasy. Having retained their Bundesliga title they have humiliated rivals Bayern Munich with a 5-2 trouncing in the DFB Pokal to secure the double for the first time in the clubs history.  This was the moment that Dortmund cemented themselves as the benchmark team in German football, and it would also be the beginning of the end of their reign.

In the four years since that magic moment a lot has changed for the club. A lot of the key players from that team have since left for pastures new, tempted by big money offers from bigger clubs. The charismatic manager Jurgen Klopp has also departed, leaving after a testing 2014/15 season, replaced by Thomas Tuchel. He is seen in German football as the man most like Klopp, and not simply because he has followed his path from Mainz to Dortmund.

In an attempt to return Dortmund to the days of challenging Bayern Munich for the title this summer the club spent a very uncharacteristic amount of money to try and compete for the title.  After finishing last season in second place they used the money from high profile departures of Mats Hummels, Ilkay Gundogan and Henrikh Mkhitaryan with fellow world class talent. 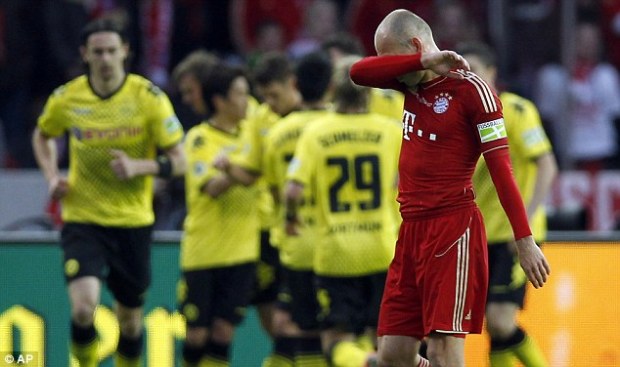 Bayern Munich winger Arjen Robben is dejection personified as the rival Borussia Dortmund players celebrate yet another goal in their 5-2 humiliation of the German football titans in the 2012 DFB-Pokal final. This result would have wide ranging consequences in the coming years. Photo copyright Associated Press.

It wasn’t just the present that the club was looking at this summer. Looking towards the future they signed several very promising young talents such as forwards Ousmane Dembele and Emre Mor from Rennes and Nordsjaelland respectively. Midfielders Mikel Merino and Sebastian Rode were also signed from Osasuna and Bayern Munich whilst left back Raphael Guerreiro joined from Lorient.

These youngsters along with Bartra join talented players already at the club such as midfielders Christian Pulisic and Julian Weigl along with emerging defenders Erik Durm, Matthias Ginter and Felix Passlack. Whilst this season things have not gone perfectly for the team in the league this season, they currently sit a close fifth but a long way off the top two Bayern Munich and RB Leipzig, in the cup competitions they have shown promise.

Dortmund’s striker Pierre-Emerick Aubameyang shows the emotions when celebrating a crucial Champions League equaliser against powerhouses Real Madrid at home. He has cemented himself as one of the world’s best strikers and the Madrid club are strongly linked with a £60 million plus bid for him next summer. The match would end 2-2 but Dortmund would have the last laugh, topping the group. Photo copyright TF Images/Getty Images.

They have made it to the last 16 of the DFB-Pokal cup and will be hoping they can continue their good record in the competition.  In the Champions League they have also impressed as they overcame Real Madrid to top their group unbeaten as they now face Benfica in the next round.

It’s clear that the club are still in transition right now, with the legacy of the Klopp era looming largely over the club still. This is entirely natural as his reign took the club from mid-table obscurity to German football powerhouses and world football pioneers. With the squad also in transition as the previous generation of unknown players leave for bigger clubs the next generation of talent is coming through into the first team.

With the likes of Marco Reus and Gotze to guide them they have the potential to once again challenge the established order in Germany, much like RB Leipzig have done this season. The squad is getting younger and this can only mean good things for the future, therefore don’t think that because the majority of well known players and manager Klopp have gone,that the Borussia Dortmund era is over. It might simply be regenerating with a new assortment of players and manager at the helm.

Thank you for reading and if you have any comments feel free to post them below. Find me on Twitter @brfcjordan95.