Football grew into the nation’s favourite sport through the lower classes of English society. Less than a hundred years ago fans and players would take time off from factory or other manual work to go and watch their local team play. Fast forward to 2018 and the landscape is now very different.

The clampdown on hooliganism in the late 1980’s and the advent of the Premier League in 1992 have been major contributors as the game attracted an entire new audience and a new family atmosphere in stadiums. In the last 25 years player transfer fees and ticket prices have skyrocketed, increasingly taking the sport from it’s working-class roots of community football clubs to more affluent worldwide businesses.

In 1990 the cheapest ticket at Manchester United cost £3.50, yet by the 2016/17 season it would cost £31. This is an increase of over 700%, a massive increase on the normal cost of living inflation. If the ticket price had kept pace with typical inflation the cost today would be a measly £9. 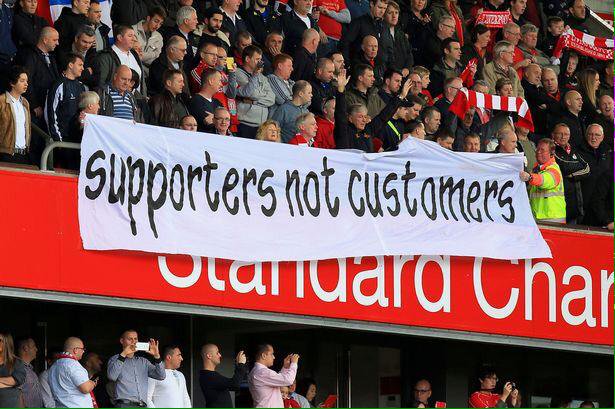 Liverpool fans protesting increases in ticket prices, and a reminder that supporters should not be treated like consumers. Photo credit: PAUL ELLIS/AFP/Getty Images.

This astronomical increase is soon due to the replicated by the separate world TV rights deals, with Premier League clubs increasingly expanding across the world to increase their fan support and reach. Plenty of clubs will have pre-season tours in emerging markets such as North America and Asia for this very purpose.

Premier League clubs now seem to follow the consumerist practices of lucrative exclusive sponsorship agreements. Chelsea FC for example have the likes of Singha as official beer supplier, Vitality as official health insurance partner and William Hill as official betting partner. This is all on top of three premier sponsors such as shirt sponsors Yokohama Tyres and Carabao energy drink.

This trend is now becoming commonplace, and follows basic consumer principles. It allows their partners to market their products exclusively to the fanbase of the club, showing just how lucrative Premier League clubs can be to potential sponsors. Whilst its great for sponsors, it means fans will be restricted on what they can bring into the stadium, and forces them to typically pay high prices for commodities such as beer and food that they may typically not want.

In the Premier League fans have grew increasingly frustrated with the rise in the price of football, from match-day tickets to official merchandise and memorabilia.  Fans are increasingly struggling to relate to the millionaire players on the pitch also, as a players weeks wages is more than 99% of the fans will earn in a year. This is similarly reflected in transfer fees, which again show how footballers are increasingly inhabiting another world of wealth and opulence that does not reflect the real world. 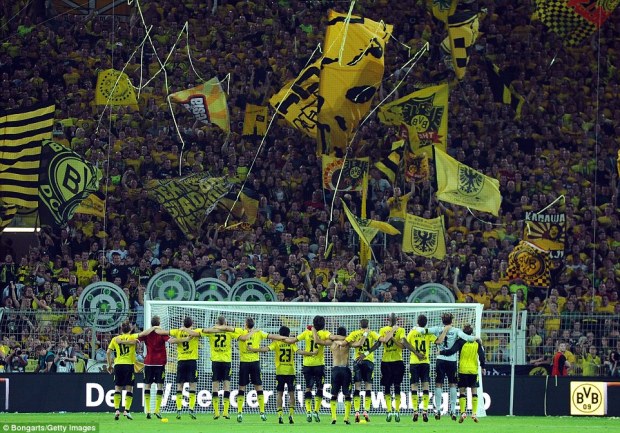 The famous Yellow Wall at Borussia Dortmund highlights how the link between players and fans is still alive, something that is not evident in the Premier League. Photo copyright: Bongarts/Getty Images.

The only major league in Europe which appears to be combating this is the German Bundesliga.  Whilst the league has the same players and wage structures as it’s European rivals, it does at least appear to be attempting to keep footballs traditional fanbase. Fans can buy season tickets to league winners Bayern Munich for £125, whereas the only Premier League club cheaper than that was newly promoted Huddersfield at £100.

Fans are also the majority owners of every Bundesliga club, thanks to the much publicised 50 plus one rule. This is to stop billionaire owners such as Roman Abramovich at Chelsea owning German clubs. With their emphasis on fans its no surprise the Bundesliga has the highest average attendance of any league in Europe. It leads with an average of 41 000, ahead of the Premier League in 36 000 and La Liga at 28 000.

German giants Borussia Dortmund top the European league table for average attendance with 80 830 fans per game on average, well ahead of Manchester United in second with 75 027. The Bundesliga dominated the final standings with ten of the top thirty average attendances coming from the German league.

In the modern game fans cannot relate to the players on the pitch, world superstars earning hundreds of thousands of pounds per week. The heart and soul of English football is being slowly eradicated by the Premier League, and it’s something that I think the Premier League can learn from the Bundesliga.

The Bundesliga is another top European league with strong teams and great players, but the fans are not being priced out of the game. The league and the clubs have kept the affordable tickets for the traditional fanbase, ensuring that world famous shows of support such as the Yellow Wall at Borussia Dortmund are a regular occurrence. With the way the Premier League is currently operating, it’s hard to see something like the Yellow Wall ever be allowed to happen. And that’s sad. Proper fan culture is being replaced by commercialization culture. Fans should be treated as just that, not consumers, otherwise the heart and soul of the Premier League will keep diminishing.

What are your thoughts on the matter? Let me know in the comments section below and feel free to find me on Twitter @JWjournalism I’d love to hear your thoughts and thank you for reading.