This past weekend felt like the truest indicator so far of where the major teams are at this season. Five weeks in and some secured statement wins, some recovered well and some struggled in victory. Let’s take a look at some of the main talking points from yet another exciting weekend in college football.

Ohio State laid their biggest indicator of the season that this team is for real. They throttled a good Nebraska side 48-7, excelling on all phases of the ball. The offense always gets the headlines, but Justin Fields deserves praise for another stellar performance since transferring from Georgia in the summer.

15-21 for 212 yards and 3 TD’s, along with 177 rushing yards for Running Back J.K Dobbins shows how dominant they were. The defense did even better, limiting Nebraska QB Adrian Martinez to 47 yards passing and three interceptions. Now 5-0, they find themselves in the play-off places for the first time this season.

From convincing to unconvincing wins, as top ranked Clemson came very close to a loss against a resurgent North Carolina. They didn’t look good in this game, with sophomore phenom Trevor Lawrence struggling again.

The Clemson team is an embarrassment of riches, but being a failed two-point conversion away from losing doesn’t inspire confidence. They’ve dropped to second in the AP Top 25 poll, and will need to regroup quickly as the pressure mounts. 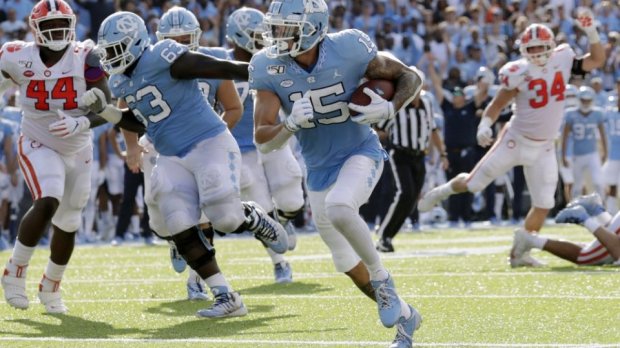 Notre Dame recovered from a tough loss to Georgia with the perfect rebuttal in this potential banana skin. Virginia came into this game full of confidence, but Notre Dame proved too strong and deserved their 35-20 victory.

Notre Dame relied on Running Back Tony Jones Jr on offense, with 131 rushing yards and 3 TD’s proving vital. On the defensive side of the ball, Defensive End Julian Okwara had a career day with three of the teams eight sacks, as well as forcing a fumble in one of their five turnovers. The defense played lights out and deserves national recognition for this performance.

Washington have recovered well from a tough early season loss to California, swatting aside USC 28-14 to regain ground in the Pac-12. Salvon Ahmed had a big day at Running Back, with 153 yards and touchdown in a vital win.

This win jumps them back up to second in the Pac-12 North. Whilst any faint dreams of a national title chance are long gone, they find themselves 15th in the AP Polls. If they can win out from here on out they will have earned a top ten berth and a prominent bowl game.

Penn State responded perfectly to their first challenge this season, mauling a high-powered Maryland offense. The defense stood out in this game, keeping a previously top ranked scoring offense to zero points. A previously unstoppable Maryland team couldn’t get anything going at all, holding Quarterback Josh Jackson to 65 passing yards and two interceptions.

For Penn State their offense had no problem scoring points, with sophomore Quarterback Sean Clifford going off with over 450 combined yards and four touchdowns in this rout. This is a big win for Penn State and they have kept themselves in the hunt.

Penn State Running Back Ricky Slade celebrates his touchdown in this 59-0 rout of Maryland on their own turf. Photo: Geoff Burke/USA Today Sport.

6) Other Key Results This Week

After such a disappointing loss last weekend Michigan responded in the perfect manner, dismantling a poor Rutgers team. Much criticised Quarterback Shea Patterson responded with three passing touchdowns and a rushing TD in a 52-0 rout. The only negative for the Wolverines was their running game struggling again.

Arizona State beat 15th ranked California 24-17, which is a pivotal win for them after a slow start to their Pac-12 season. They are on the outside looking in right now, but this is a massive win and will give them confidence going forward.

For the standout performer we can’t overlook Alabama wide receiver DeVonta Smith. The third head of their receiving core behind Jerry Jeudy and Henry Ruggs went off against Ole Miss, with 274 receiving yards and five touchdowns.

Another receiver who impressed is Oklahoma’s CeeDee Lamb, who showed an incredible turn and burst of speed on a 71 yard touchdown against Texas Tech, ending up with 185 yards and three touchdowns. He’s a first round prospect in a loaded wide receiver class this year.

Now we’re well into the season, the key contenders for the 2019 Heisman Trophy are emerging. Alabama star Tua Tagovailoa is having a monster season, currently second in the nation with over 1700 yards in only five games. He’s also protecting the football, with 23 touchdowns and zero interceptions.

Of the rest Joe Burrow is the outside bet, having surprised everyone with the impressive start he’s had. Oklahoma’s Jalen Hurts has played lights out this season, going for over 1200 yards passing and over 440 yards rushing in four games. Tua remains the favourite, but there’s plenty of contenders keeping him honest.

Tua Tagovailoa is living a charmed life this year. He’s the current Heisman favourite and is many draft experts pick for the first overall selection in the 2020 NFL Draft. Photo: Joe Robbins/Getty Images.

The latest rankings going into week six have been released, with the mild surprise that Alabama have overtaken Clemson for the top spot. It’s an understandable move after their performances last weekend. After their impressive win Ohio State jumped LSU for fourth and the final play-off place.

Further down, Notre Dame are the only other team to move in the top ten, vaulting Florida for ninth. Washington improve two places to 15th, with Utah, UCF and Michigan all moving up to 17th,18th and 19th respectively. California, USC and Kansas State are the big losers, all dropping out of the rankings this week.

10) First Coaching Casualty of the Year

Rutgers head coach Chris Ash was the first casualty of the 2019 season. After his teams 52-0 demolition against Michigan he was shown the door after three years in charge. His 8-32 record is poor, along with a 3-26 record in the Big Ten conference. Offensive coordinator John McNulty has also been fired after their 1-3 start.

That wraps up the main talking points from another week of college football, if you have any thoughts on this points feel free to comment below or find me on Twitter @JWjournalism. Finally, a big thank you to everyone who read this blog I really appreciate it!