Before getting started I just wanted to say a massive thank you to anyone who read part one of this story I massively appreciate it! If anyone hasn’t yet read it yet they can find it here.

Last time we made it up to early 2006 and by this time not much had happened with Manzano’s allegations. A Spanish Sports Council investigation was dropped due to lack of evidence and the sport of cycling moved on denying any of his allegations. Things began changing  in early 2006 when the Spanish Guardia Civil opened a police investigation on these allegations based on endangering public health crimes.

The police began investigating Fuentes using wire taps of his phone and covert surveillance on his movements. What they were quickly able to establish was that Fuentes had become a major player in the doping of professional cyclists. Just in May alone they were able to place him with a wealth of Spanish connected riders.

Whether it was Santiago Botero and Constantino Gutierrez on the 4th May, Oscar Sevilla on the 13th May or Jorg Jaksche on the 14th May it was clear that Fuentes offices in Madrid had become a one-stop doping shop for most in the peloton. Multiple blood bags with dates matching their arrivals would later be found in medical freezers in Fuentes apartments. As well as cyclists flying in on an almost daily basis Fuentes was also orchestrating doping for many top name riders competing in the 2006 Giro D’Italia that month also.

Phone records from this time period show Fuentes talking with his assistants Alberto Leon Herranz and Jose Luis Merino Batres, along with Comunidad Valenciana DS Ignacio Labarta Barrera, who were organising the doping in Italy. After both stages seven and eight on the 13th and 14th of May Fuentes and Labarta Barrera comment on the days stage, talking about the contenders they have doping links with.

Those include dominant overall winner Ivan Basso, who is linked in the documents with having taken a blood bag two days before his first stage win on the 14th May, however this has never been confirmed. Second place Jose Enrique Gutierrez was also listed as a client of Fuentes, with his documents suggesting he took two bags, one days before the Giro and the second on the 12th the same as Basso. Michele Scarponi and Unai Oso Eizaguirre were also mentioned as having finished well with both later being implicated by documentation to using Fuentes for doping.

The first shocks of this investigation were felt on the 23rd May with Spanish police arresting Liberty-Seguros directeur sportif Manolo Saiz along with Fuentes and three others. Raids of Fuentes medical practices found a trove of performance enhancing drugs and documents linking him to professional cyclists.

Between two medical practices in Madrid Spanish police uncovered 185 refrigerated blood bags along with plasma bags to maintain the blood and medical equipment for blood transfusions. Police also found Actovegin,Andriol (testosterone), Eposino (EPO),Jintropin (HGH),Synacthene, Vivarin (Caffeine tablets) and six different varieties of Insulin.  The majority of these medications were illegal in Spain and were bought from counterfeit labs across the world. Along with these were a trove of legal medical products such as Prozac and Diazepam.

Police also found a jar of white pills with a hand-written known which they believed to be a steroid called Oxitosone. They uncovered a mysterious red powder which they believe was given to athletes to use to contaminate any doping tests to ensure they would not test positive.

The man at the centre of this scandal, Eufemiano Fuentes leaves Spanish court during his trial for charges of endangering public health. The case has floundered in court since his initial arrest in May 2006. Photo:AP.

In police interviews on the 24th May Liberty-Seguros team director sportif Manolo Saiz noted star rider Roberto Heras requested working with Fuentes in early 2004. From here fellow former Kelme riders Marcos Serrano and Angel Vicioso made similar requests. After impressive 2nd and 7th places in the 2003 and 2004 Vuelta Saiz then requested that Isidro Nozal work with Fuentes from late 2004 onwards.

Barely six months later Nozal would be suspended for two weeks after registering a hematocrit of over 50% at the 2005 Dauphine Libere, a key Tour de France warm-up race. He would later admit to having done three blood transfusions with Fuentes in 2005.

What the documents would show was that Fuentes had extensive links with the doping of the two Spanish teams Liberty-Seguros and Comunidad Valenciana. He appeared to have a personal relationship with Liberty-Seguros DS Manolo Saiz and Comunidad DS Jose Ignacio Labarta along with his prior relationship to the team as their former doctor in their Kelme days as well as having his sister Yolanda Fuentes as the teams doctor from 2001-2006.

He was directly linked to the likes of Roberto Heras, Jorg Jaksche, Joseba Beloki, Isidro Nozal, Marcos Serrano, Michele Scarponi, Angel Vicioso and David Etxeberria at Liberty-Seguros to name just a select few of many. He had similar longstanding links at Comunidad Valenciana along with a wealth of foreign riders who used him for doping. 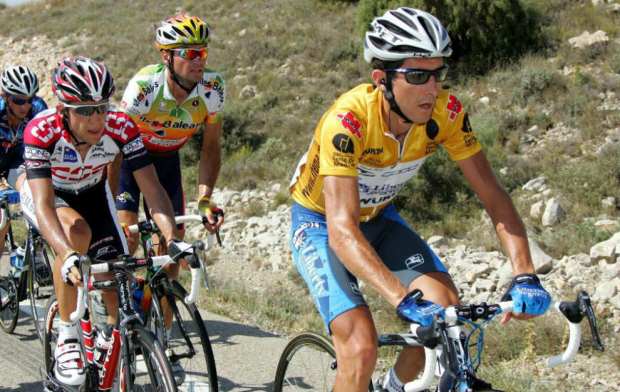 Spanish climber Roberto Heras wearing the leaders jersey at the 2005 Vuelta a Espana. After a positive EPO test from the penultimate day Heras was stripped of victory but was later reinstated in 2012 after numerous court appeals. Heras had requested working with Fuentes 18 months prior to this race. Photo: Rodolfo Espinosa/Brand.

In this early stage however this information was not public with media speculation leaking slowly as more and more riders were speculated to have worked with Fuentes. Amid this hysteria the teams looked to protect themselves with T-Mobile asking riders to formally distance themselves from Fuentes whilst Phonak suspended star riders Santiago Botero and Jose Enrique Gutierrez.

On the 1st June Comunidad Valenciana DS Jose Ignacio Labarta resigned, as Liberty-Seguros ended their sponsorship of the old ONCE team. This left the team scrambling as they transitioned from Liberty-Seguros-Wurth to Astana-Wurth. The sport was descending into farce as Astana-Wurth were first banned and then allowed to compete in the 2006 Tour de France as the 2006 Spanish National Road Race was cancelled after 500 meters because of a mass rider protest.

The biggest drama from the case would come only two days before the start of the 2006 Tour de France. I’ll explain what happened and bring us to the modern day in the third and final installment of this thread which will be coming very soon!

Thank you for reading part two if you have any feedback or comment at all feel free to leave it below you can find me on Twitter @JWjournalism.