The college football world is still processing a crazy week eleven slate, in what will surely be the craziest weekend of the regular season. Week 12 returns to normalcy, with some good games schedules as teams prepare for this final stretch. After some debate in the week on the latest play-off rankings, Georgia gets a chance to prove itself against a good Auburn team. We also have some sneaky good games to catch up on too.

Georgia have flown under the radar since their loss to unranked South Carolina, but this weekend they can prove their worthy of a play-off place if they can travel to Auburn and win. 12th ranked Auburn are a good team, who need this win to remain in contention for a premier bowl game.

Both quarterbacks have been above average this year, and both have premier skill position players to help them out. The true matchup will be the Georgia offense against the Auburn defense, with plenty of NFL talent on display. Georgia should edge this game, but don’t be surprised if Auburn cause an upset.

2) Key Matchup of the Game

As I mentioned above the key matchup will be the Georgia offense facing the Auburn defense. The Georgia offense is led by quarterback Jake Fromm, who has been solid this year. Running back D’Andre Swift is the focal point of their offense, and with a good offensive line he could seriously hurt Auburn.

On the Tigers side they are led by defensive tackle Derrick Brown. Four sacks and two forced fumbles show the impact this future top ten draft pick has had this year. This defense is a top 30 unit this year, although Georgia too has a very good defense. 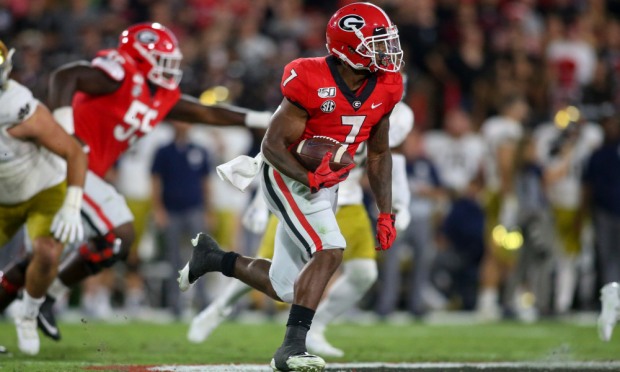 Georgia running back D’Andre Swift running away from defenders in 2019, a not uncommon sight. Photo: USA Today Sports.

Baylor are one of the pleasant surprises of 2019, recovering from scandal to a 9-0 start. This has led them to 13th in the rankings, although some have questioned their strength of schedule. They get the chance to answer their critics if they can upset a juggernaut Oklahoma team.

Oklahoma have looked shaky in the past two weeks and both teams can score at will. The Sooners have better skill position players, led by transfer quarterback Jalen Hurts. Baylor will need to be at their best to cause the upset of the week here, especially as they won’t have home support.

For any betting fans a good bet would be to bet the points over in this matchup. Oklahoma has the top ranked offense in the country, averaging over 585 yards a game. Led by quarterback Jalen Hurts and receiver CeeDee Lamb, the Sooners can score at will on any team. Baylor itself is a top 25 offense, and will no doubt score here.

Baylor has the better ranked defense, currently 31st overall. They average almost 340 yards allowed a game, against lower competition. Oklahoma sits a little lower in 41st, averaging 354 yards. Both teams are too explosive for these defense’s to handle.

Both teams enter this game with contrasting emotions, with Minnesota upsetting fourth ranked Penn State last week, and Iowa recovering from a tough 24-22 loss to Wisconsin. Minnesota have now risen to eighth in the rankings, with a perfect 9-0 record. This week is another tough test, travelling to an always solid Iowa team.

The Golden Gophers are the talk of college football, and a win here would cement themselves as almost certain Big Ten West champions. At 6-3 Iowa need a win to finish strong, in what has been a slightly down year for the Hawkeyes.

6) Can Minnesota Bounce Back?

This may seem an odd title after their biggest win in recent program history, but after the emotion of last weekend’s win can they recover and see off another tough opponent? The Iowa defense is a top ten unit, therefore scoring points will be very tough this week.

Minnesota is also known for their defense, and with the Iowa offense ranked 87th in the nation they will have some success stopping the home team. This is shaping up to be a defensive slug fest, will Minnesota be able to win this style of game so soon after a statement win?

7) Under the Radar Games to Watch

News has speculated this week on the future of Michigan State head coach Mark Dantonio, and nothing would be better to silence that then a win against hated rivals Michigan. State hasn’t been good at 4-5, but Michigan have flattered to deceive and anything can happen in a rivalry game.

Navy travels to Notre Dame, looking to upset a solid Fighting Irish team. Navy has an awful record against Notre Dame, but could they cause an upset? Texas travels to Iowa State, a game either could win. Matt Campbell has made Iowa State a tough place to play, and this Texas defense has played poorly all year.

Chase Young learned this week his suspension is being reduced from four to two games. This is excellent news for the stud defensive end, as he only misses last weeks blowout win over Maryland and this weeks likely rout of 2-7 Rutgers.

Young and Ohio State cooperated with the NCAA investigation, likely reducing his suspension. It’s clear this wasn’t a major infraction, with the biggest damage being to his outside chance of a Heisman Trophy this year. Young would have put up big numbers in these two games, but can now recover for a key final stretch for Ohio State.

Chase Young has been head and shoulders the best defensive player in college football this season. Photo: USA Today Sports.

This weeks official College Football Playoff rankings cause a slight stir, with Alabama dropping to fifth after their loss to LSU. The contention is that Georgia is ranked above them in fourth, despite losing to unranked South Carolina. The Crimson Tide contend their loss is much better than Georgia’s, therefore should be ahead of them.

LSU, Ohio State and Clemson are solid in the top three places. Oregon, Utah and Minnesota are on the outside looking in, with Penn State falling to ninth and Oklahoma rounding out the top ten.

As we enter week 12 now is a good time to take stock of the Heisman contenders. LSU quarterback Joe Burrow leads the way, having enjoyed a stellar season with his team ranked a consensus number one in the nation. He has 3200 yards in nine games, with a touchdown  to interception ratio of 33-4.

Alabama’s Tua Tagovailoa is another contender, although his ankle injury will have hampered his stock. Losing to LSU is something that will count against him also. At the moment the closest contender for Burrow will be Justin Fields at Ohio State, having led them to second in the rankings after transferring from Georgia.

That wraps up my preview for week 12 of college football, if you have any questions or comments at all feel free to leave them below or find me on Twitter @JWjournalism. Finally, a massive thank you to everyone who read this blog I really appreciate it!