The latest rumour gaining traction in the F1 community is that German Nico Hulkenberg will soon sign for the Renault F1 team. This on the surface seems a logical move as Hulkenberg is a very talented driver with a great reputation in the paddock, but hidden in this information is that they could potentially lose another highly rated driver, Dane Kevin Magnussen.

For anyone watching Formula One this season, the title may prove a struggling one to endorse. Kevin Magnussen has struggled this season with an uncompetitive Renault car in their much publicized return to F1. So why should the Danish driver retain his seat for next season? The answers lie in the details of his career up to this moment.

He has a stellar junior racing CV and has yet to get a fair shake at the highest level. Whilst this may seem strange to say considering he has only ever driven for top teams McLaren and Renault, this is sadly the case. In his very first race at the unfamiliar Albert Park circuit he finished in an eventual second place, the highest scoring debut since Jacques Villeneuve in 1996.

Jacques Villeneuve in the dominant Williams-Renault on route to second in his debut at the 1996 Australian GP. Magnussen was the first to match his feat 18 years later. Photo copyright Michael Cooper/Getty Images.

Magnussen and McLaren were unable to reach these heights again thanks to a less competitive car and the inevitable rookie mistakes. He did score points in eleven of nineteen races however, and narrowly lost out to world champion team mate Jenson Button 10-9 in the qualifying head to head.

From here the politics of Formula One began to rear their ugly head as not for the first time circumstances beyond his control went against him. After an impressive debut campaign in normal circumstances Magnussen would have been retained alongside Button for 2015. Unfortunately for him, the end of the season would prove anything but normal.

After a disagreements with new Ferrari team principal Marco Mattiacci, Spaniard and double world champion Fernando Alonso was suddenly on the driver market. With a new partnership with Honda starting in 2015, Alonso was quickly announced as having signed with McLaren for 2015. 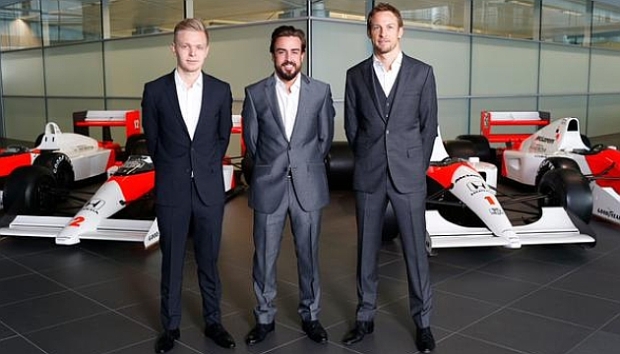 Kevin Magnussen on the left at the presentation of the McLaren-Honda team for 2015. Alongside him is Fernando Alonso, the man who took his seat, and 2014 team mate Jenson Button. Photo copyright McLaren/Marca.

After difficult negotiation the decision was made that the experience of Button would be more beneficial in Honda’s first season back in F1 since 2008. Despite his enormous potential Magnussen was forced to step down from racing and accept a reserve driver role for 2015. Even a potential Indycar drive was vetoed by the team as he was called up to replace an injured Alonso for the opening Australian Grand Prix.

The weekend itself could be used as a metaphor for his F1 career so far. It promised much with a new era beginning with for McLaren, but ultimately delivered little. He qualified last in the unproven car and did not start the race thanks to an engine blow up on the way to the grid.

This would prove the most action Magnussen would see all season, confined to the third driver role for the rest of the year. As the season wore on it became more likely that Magnussen would leave the McLaren team. Despite being part of it’s young driver academy since the early years of his career, he simply found himself at the wrong team at the wrong time.

Magnussen in action at the 2015 Australian Grand Prix, replacing the injured Fernando Alonso. It would prove hugely disappointing, as would the rest of the year being on the side-lines. Photo copyright Motorsport.com

With the all star line up of Alonso and Button, it was very hard for the younger drivers to make their way into a full time drive with the team. Despite both reaching the end of their careers, Magnussen still found himself shut out of a race drive for 2016. To further complicate matters, now Magnussen had competition within the team for a race seat.

Belgian Stoffel Vandoorne was a part of the same McLaren driver academy, and a dominant GP2 title campaign in 2015 led many to believe he was ready for the step up to F1. Although he didn’t graduate to F1 full time in 2016, it was clear he would soon be promoted by the team.

Vandoorne appeared to have leap frogged Magnussen into the third driver reserve role, and now the proverbial writing was the on the wall for the Dane. The split was finally announced in early October, with it subsequently being revealed the harsh nature of his dismissal.

Stoffel Vandoorne  on route to one of his many GP2 victories in 2015. He dominated the series and showed he was ready to step up to F1 for 2016. With Magnussen in the fold McLaren faced a choice between the two on who to keep. Vandoorne won out. Photo copyright Sam Bloxham/GP2 Media Services.

The Dane was sent an email notifying him he had dropped from the personal assistant of Ron Dennis on his birthday. The nature of his dismissal seemed to many to be in accordance with the ruthless nature team leader Dennis, who was known for within the paddock. With only several months before the 2016 pre-season testing began, could he find a race seat in time?

A major hindrance for the Dane was his lack of personal backing. In an era where F1 was in a financially unstable time, drivers were increasingly being relied on to bring a personal sponsor package to secure their drive. Despite having a high reputation as a promising young driver, it was clear securing a drive would be very hard for him.

Magnussen was strongly linked to the new Haas F1 team, although many believe he narrowly lost out on the drive to French driver Romain Grosjean. Talks with Manor racing proved fruitless, although salvation would soon be provided from an unlikely source. Reports emerged in late January that the new Renault F1 team were set to replace Pastor Maldonado, after his state sponsorship funding was not forthcoming.

In a matter of a few days, Magnussen was quickly announced as having replaced Maldonado at Renault for the coming season. With a late deal for the season and joining a new team, not a lot was expected of them this year. At the time of writing they have struggled to even match the lowly expectations of them this season.

The year has been a long one for everyone involved, with Magnussen scoring only two points finishes from seventeen races at the time of writing, with four races remaining. He has managed to get on top of team mate Palmer, beating him 10-7 in qualifying and scoring the teams only points of the year.

Despite having the upper hand this year, it now appears increasingly likely the Renault line up for 2017 will not include Magnussen. Hulkenberg appears to be close to signing with the team, whereas the second seat has been strongly linked with Mercedes junior driver Esteban Ocon. He was on-loan with the team as reserve driver for the first half of the year, before taking on the second seat an Manor Racing.

Outside of Renault there are few remaining seats available, of which plenty of drivers are looking to fill. His most likely option may well be to effectively swap with Ocon at Manor, with other seats either requiring funding or they already have a driver close to signing.

Magnussen  in action for Renault at the opening Australian GP, it has so far proved to be a difficult season for both the Dane and the team.© Copyright: Photo4 / XPB Images

Of course Magnussen does have options outside of F1 such as Indycar or sportscar racing, having contacts in both series from last year. It would be a huge shame however should be forced out of F1, for the problem would of been non-related to his driving. Elements such as politics and funding have almost always prevalent in Formula One, it’s a shame for many traditional fans when it forces a talented young driver out of the sport.

In my own opinion Kevin Magnussen is easily capable of being a grand prix winner given a car somewhat capable of it. Whilst the grand prix conveyor belt is always producing talented young drivers, it seems Magnussen has not been given a fair chance to show his full potential thanks to circumstances outside of his control.

If this is his last season in F1, he will unfortunately join a long list of very talented drivers who have found themselves unable to show their talent thanks to being in the wrong place at the wrong time. Just like last winter, this one will be crucial to Magnussen and the future direction in his career. I for one hope it still involves F1.

Have you any thoughts on this article? Let me know your opinion in the comments section below, I would hugely appreciate it. Find me on Twitter @brfcjordan95.