Two years ago Bristol Rovers were staring at the abyss, as they were unceremoniously dumped out of the English football league, after 94 uninterrupted years. For the first time in club history they would be a non-league side, facing huge turmoil going into their debut season in the Vanarama Conference.

Fast forward to the present day and the future could not possibly look more different for the well supported West Country club. After a dramatic injury time winner from left back Lee Brown, the club known as the Gas will be plying their trade in League One next season. Their victory and dropped points from Accrington Stanley ensured Rovers a nail biting promotion thanks to a marginally better goal difference.

Rovers have gone from facing the likes of Dover and Braintree to now facing the likes of Bolton Wanderers and Sheffield United within two very short years. The club has changed dramatically in this time period, with a complete overhaul of the squad and whole scale changes in other key positions.

Manager Darrell Clarke was handed the management job with only seven games to go in the fateful relegation season, coming into a situation whereby it was almost impossible for him to stave off relegation. He looked to have completed a great escape going into the final day, only needing a solitary point at home to secure safety. 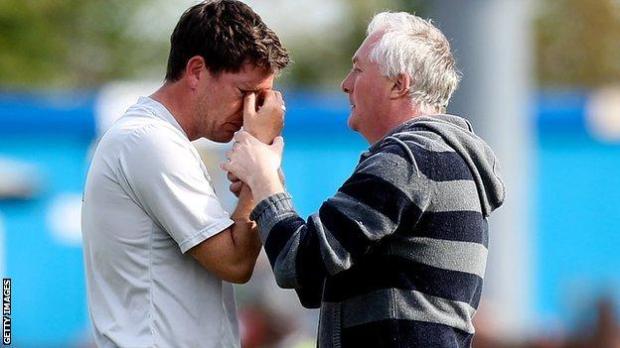 Manager Darrell Clarke being comforted by a supporter after the clubs final day relegation in 2014. Photo copyright Getty Images.

The game will forever be etched in the memory of the supporters, who remember a hugely disappointing 1-0 defeat which sealed the club’s drop into the fifth tier of the football pyramid. Widespread change in the squad produced the necessary results after a slow start to the season, as the club found itself steadily rising up the league table as the season wore on.

After narrowly avoiding toppling Barnet as champions on the final day of the season, Rovers were forced to go through the play-off system if they wanted promotion. Local rivals Forest Green Rovers were brushed aside, as the club found itself finishing the season they way it had started, with a stalemate draw against Grimsby.

The national stadium of Wembley became the theatre for the over 30 000 Rovers fans as they narrowly won out 5-4 in the deciding penalty shoot out. The celebrations lasted long into the night, as the club found themselves back in the football league at the first time of asking, becoming the first club in over a decade to achieve this.

With a few summer additions, Rovers embarked on their League Two season, one that would prove to be as equally dramatic as their previous campaign. Good results ensured they were consistently in the play-off picture, edging slowly closer to the hallowed automatic promotion places. A draw away to Stevenage looked to have dented Rovers ambitions of a top three place, but going into the final game of the season on Saturday everyone at the club was dreaming of the unlikely.

Rovers needed to win with either Oxford or Accrington Stanley dropping points to go up, something that looked even less likely within the first ten minutes as already relegated visitors Dagenham & Redbridge produced a shock goal to silence the crowd and take the lead. The response from the home side was swift, but the vital second goal proved much harder to come by.

Despite a seemingly endless barrage of Rovers shots on target, they could not find the opening they needed. Entering stoppage time, Rovers looked destined for the lottery of the play-offs, that was until the second minute of extra time. League Two top scorer Matty Taylor saw his shot bounce off the post from close range for the second time, but before he had a moment to feel disappointed he would of seen the ball rolling straight to defender Lee Brown.

Staring at an empty goal net he tapped the ball home for the pivotal goal they needed. The final minutes were an agonising wait to see how the Accrington Stanley game would finish.  A similar miracle would not be repeated further north, leaving Rovers fans and player free to begin their delirious celebrations. Soon videos emerged of fans swamping the Memorial Stadium pitch, Rovers owner Wael Al-Qadi being carried on the shoulders by the jubilant supporters towards the local pubs. Traffic found itself being redirected as thousands of fans took over the majority of Gloucester Road close to the stadium. 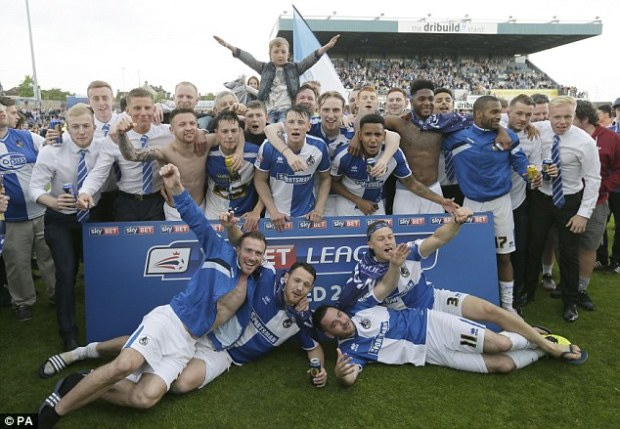 The Rovers players celebrate with fans on the pitch after securing a last gasp automatic promotion place into League One. Photo copyright Press Association.

The scenes on Saturday were as far away from what had occurred in the previous five years, with the credit for the revival mostly resting on Clarke and the squad he has assembled. Everyone involved has bought into the methods Clarke uses, and will now surely be garnering attention from further afield thanks to successive promotion seasons.

Things have been improving off the pitch also, with the club recently being bought by the Al-Qadi family, owners of the Arab Jordan Investment bank. With secure financial backing behind the team for the first time in a long while, the clubs improved finances and on field play have renewed hopes the club can build a modern stadium with the potential to move the club into the future.

From here it’s not known what will happen in the coming summer, but surely the aim will be to first maintain and then bring in some extra players to help for the rigours of the third tier of English football.

One certainty around the club right now is the fact for once the club has some positive momentum and is going forward, something that seemed impossible only several years ago. That is a testament to a remarkable achievement everyone at the football club has done in recent years, to the point now that some may argue being relegated was one of the best things to happen to the club in recent memory. Without it, it’s unlikely the club would of went through the shake up needed to get to it’s current position.

Any Bristol Rovers fans reading this article? What are your thoughts on the clubs recent promotion and ascendency in the past two years? Feel free to comment below and let me know your thoughts. Finally I want to say a huge thank you for reading and you can find me on Twitter @brfcjordan95.